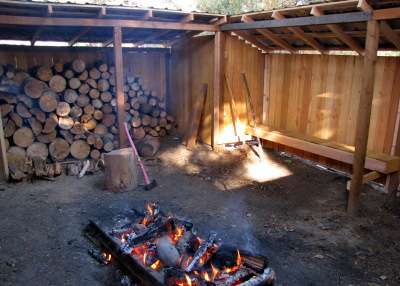 Several weeks ago, Dakota finished his eagle project. Some folks were interested in seeing the end result, so I am posting these photographs for their benefit. I have to say that things turned out well. My son has made me very proud. 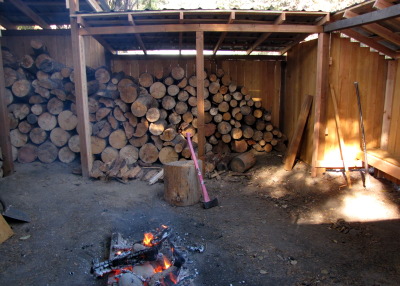 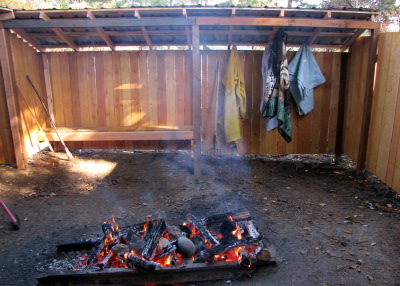 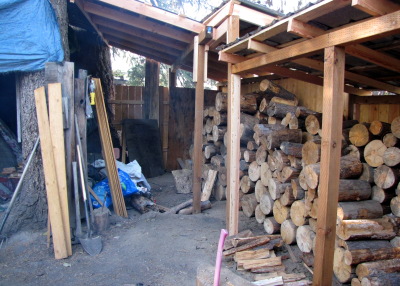 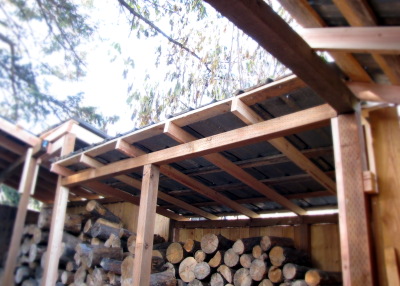 Posted by Barry Moses (Sulustu) at 12:36 AM No comments: Links to this post 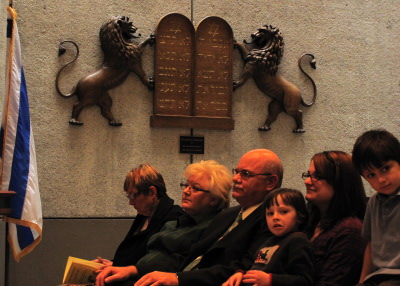 On Thanksgiving morning, I attended an inter-faith service at Temple Beth Shalom where representatives of several faith traditions spoke about faith, gratitude, and peace among diverse peoples. The service was sponsored by the Spokane Interfaith Council, Second Harvest of Spokane, and Temple Beth Shalom. 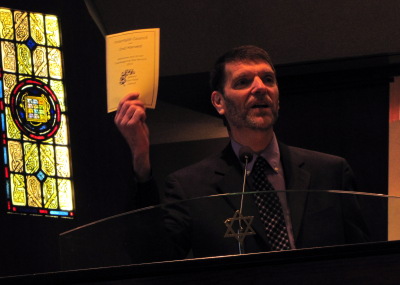 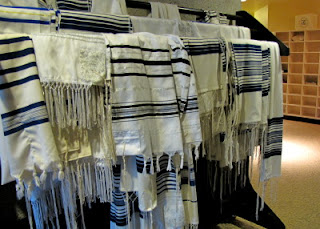 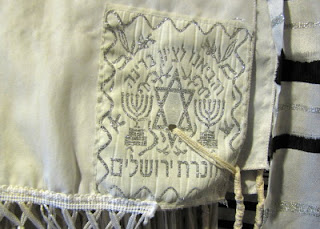 Before the service, I asked permission to take photographs inside the synagogue. The rabbi gave permission for pictures on any day, except for the Sabbath (Saturday). These prayer shawls were hanging inside the cloak room of the temple. 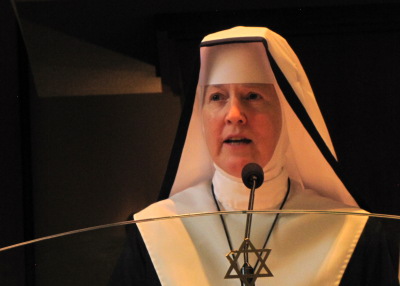 Sister Mary Euchrista represented the Catholic faith. It was a happy reunion for me because years ago, she completed her student teaching in my classroom at the Medicine Wheel Academy. 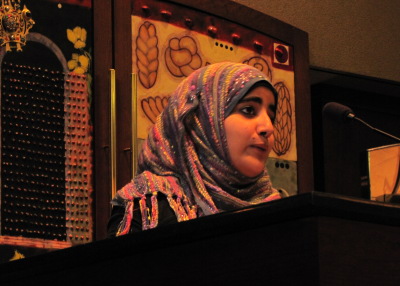 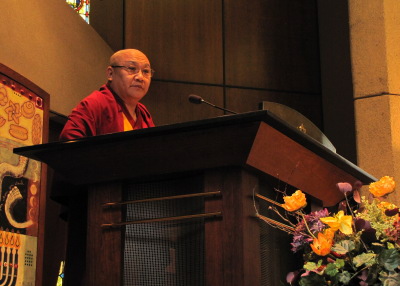 Geshe-la also spoke during the ceremony and represented Tibetan Buddhism. 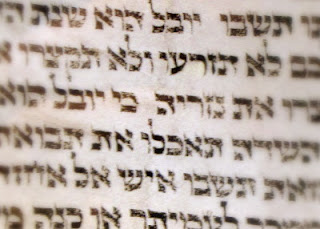 Hebrew writing was displayed in the temple lobby.
Posted by Barry Moses (Sulustu) at 8:15 PM No comments: Links to this post 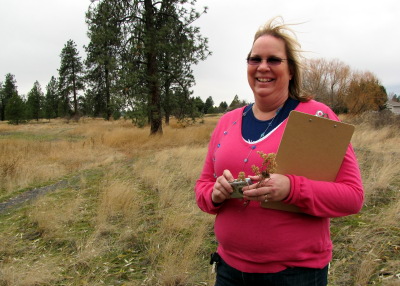 My friend and co-worker Carole Parks is helping me to document the heritage plants of Drumheller Springs. Her work will partially fulfill credit for her graduate degree, but will also help prevent further encroachment upon the indigenous plants of the area.
As my readers may recall, I got involved with the preservation of Drumheller Springs after several local environmental groups planted ponderosa pine on the digging grounds once used by the Spokane Tribe. Camas, bitterroot, and other native foods were disturbed by the planting of new trees. This encounter led to a meeting with the Spokane Parks Department and the Spokane Lands Council, and as a result, the Lands Council agreed to remove the trees.
Since that time, I have been working to explore legal and institutional options to protecting the indigenous plants of Drumheller Springs. 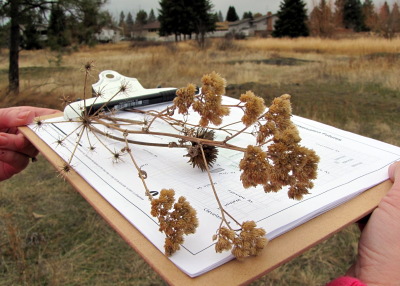 When Carole and I visited the land this morning, some of the native plants still had visible parts that she was able to collect for her project. 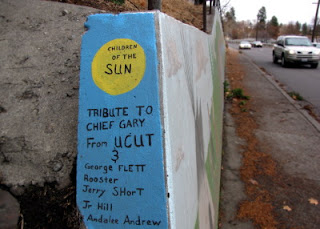 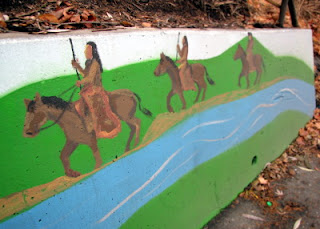 We also explored some of the other nearby features, including the mural on Ash Street, painted by George Flett and company. 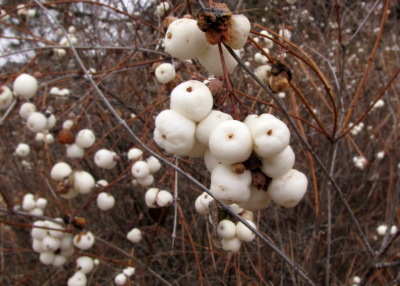 Many plants are still visible, despite the change in weather.
As an aside, I have always been fascinated with these white berries, even though I can't think of any practical uses. I once heard a traditional story that described these berries as the service berries of the land of the dead. Unfortunately, I was never able to locate that story again. In any case, the Spokane Language may corroborate this story to some degree. The Spokane describe these berries as "corpse berries," or tmtmniałq.
If anyone knows of any traditional stories or uses for the plant, please send me an email.
Posted by Barry Moses (Sulustu) at 4:52 PM No comments: Links to this post 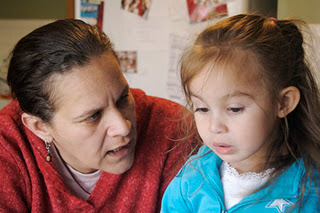 We Still Live Here - As Nutayunean is a brilliant PBS documentary showing the revitalization of the Wampanoag Language of Massachusetts.
The Wampanoag are perhaps most often remembered as the people who greeted the English Pilgrims at Plymouth and saved them from starvation. In return, the English persecuted the Wampanoag, stole their lands, and actively sought the destruction of Wampanoag culture. Among Indian people in North America, these are the ones who first confronted the loss of language, indigenous identity, and traditional knowledge.
And yet the Wampanoag survived. They continue to live in communities near Cape Cod and Martha's Vineyard.
The documentary begins with Jessie Little Doe, a Wampanoag social worker, who received a dream from her ancestors. They asked if her generation was willing to reclaim the Wampanoag Language. She shared her vision with others in the tribe, and together they began a journey to reclaim their language.
As someone who cares deeply for my own language, this film both inspired and motivated me to continue my efforts to learn and to teach others.
The film is about 55 minutes long and is certainly worth an hour of your time. But you have to watch it right away - the free internet showing of this film ends on November 24. Click the following link to view the film.
http://video.pbs.org/video/2168433568#
A few quotes from the film:
Death is not permanent for languages. They can come back.
We had asked elders and spiritual leaders, “How do we regain our language?” And we were told that it’s not your language that’s lost, it’s you, and that a day will come when a child will be born and they will bring you back the language.
Posted by Barry Moses (Sulustu) at 12:05 AM No comments: Links to this post 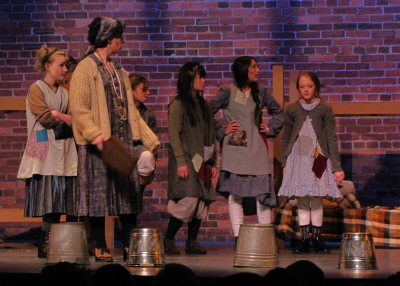 My children are performing at the Bing Crosby Theater in CYT Spokane's musical production of Annie. In the scene above, Whitney plays one of the orphans as she interacts with Miss Hannigan. 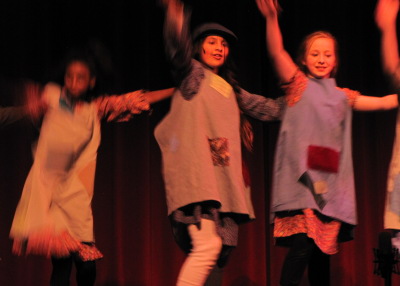 This has been an exciting show for Whitney. She has a number of important lines and gets to wear a microphone for the first time. 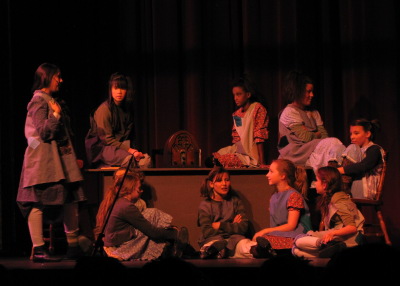 Whitney with the orphans. 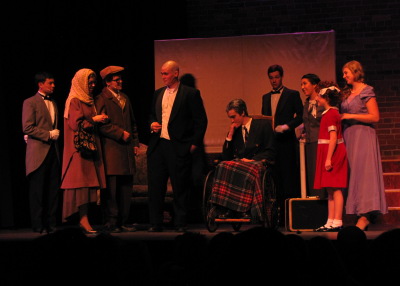 Dakota plays the part of Drake, who is the butler to Daddy Warbucks. In this scene, he is present when Rooster attempts to deceive Warbucks and claim Annie as his own child. In return, Rooster would receive a $50,000 reward. President Roosevelt is also present, seated in his wheel chair. 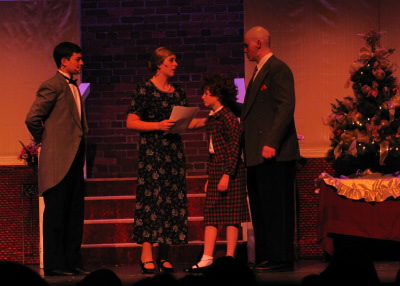 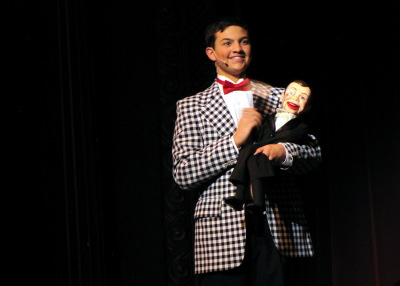 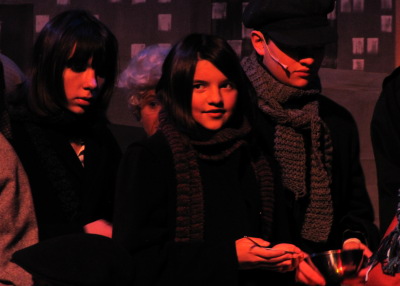 McKenna plays the part of a townsperson in Hooverville. 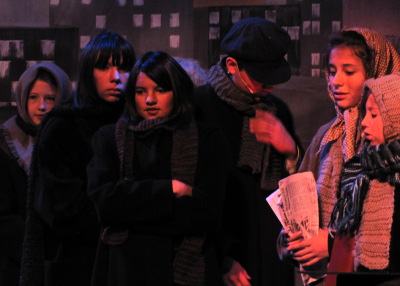 Another shot of Hooverville. 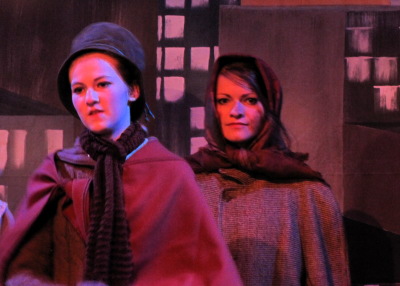 Mariah also performed in this play. 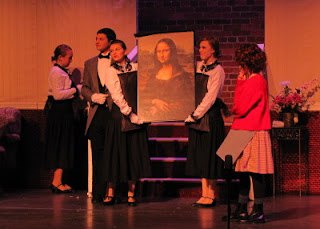 Small doses of comedy are scattered throughout the play. In this scene, Daddy Warbucks is presented with the original Mona Lisa, but he decides he doesn't like it. "Send it back!" he says.
Posted by Barry Moses (Sulustu) at 12:30 AM No comments: Links to this post 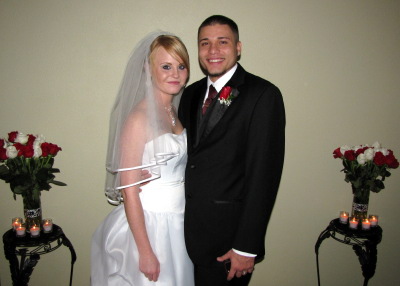 My foster son Anthony got married in a simple ceremony at the bride's home.
The wedding was a surprise to almost everyone in both families. For my part, I met the bride only once before, and I met her family for the first time just two hours before the young couple took their vows. Even so, Anthony had asked me to perform the ceremony and I agreed.
When the bride appeared and walked down the "aisle," Anthony beamed with happiness and then cried. And when they exchange vows, they both cried. In all the years I have known Anthony, I have only rarely seen him express emotion in this way. The ceremony was simple, but quite beautiful.
I wish Anthony and Nicki all the blessings of the Creator as they build a new life together.
Posted by Barry Moses (Sulustu) at 2:27 AM No comments: Links to this post