An inspiring video about Marie Wilcox, the last fluent speaker of the Wukchumni language.
Posted by Barry Moses (Sulustu) at 9:47 AM No comments:

Several weeks ago, I re-posted an article from the Valley Voice, a small newspaper in British Columbia, where the author reported a multi-faith prayer vigil for the health of the Columbia River. The same event was also reported by the Arrow Lakes News in Nakusp.

On the banks of the Arrow Lakes reservoir a solicitous group gathered and listened to Barry Moses, a member of the Spokane Tribe, describe a dream that he had as a young man. In the dream, the world was barren and dry, devoid of life; then suddenly the earth shook and a gush of water was released from the rocks forming a new river. Moses stood on the banks and watched the river flow until he noticed fish leaping through the waves. He jumped in and followed the fish in the upriver journey until they all reached a beautiful, fertile land. Paradise.

“This is what I pray for today,” Moses sums up, “I pray for the return of the salmon and the restoration of the river.”

Moses shared his vision, a prayer and a song with a group of gathered community members who attended a vigil to raise awareness about the plight of the Columbia River. This vigil was part of a series of multi-faith events that began August 6 in Washington and continued every day up the river ending with the last vigil scheduled at the source of the Columbia, Canal Flats.

Shelly Boyd, member of the Confederated Tribes of the Colville Reservation, spoke of her connection to the Arrow Lakes area and expressed the need for unity and cooperation. “This side of the line, that side of the line. The water doesn’t even know there is a line,” she expressed. Boyd contributed to the vigil with a prayer and sang a traveling song in her native tongue.
Posted by Barry Moses (Sulustu) at 1:05 AM No comments: 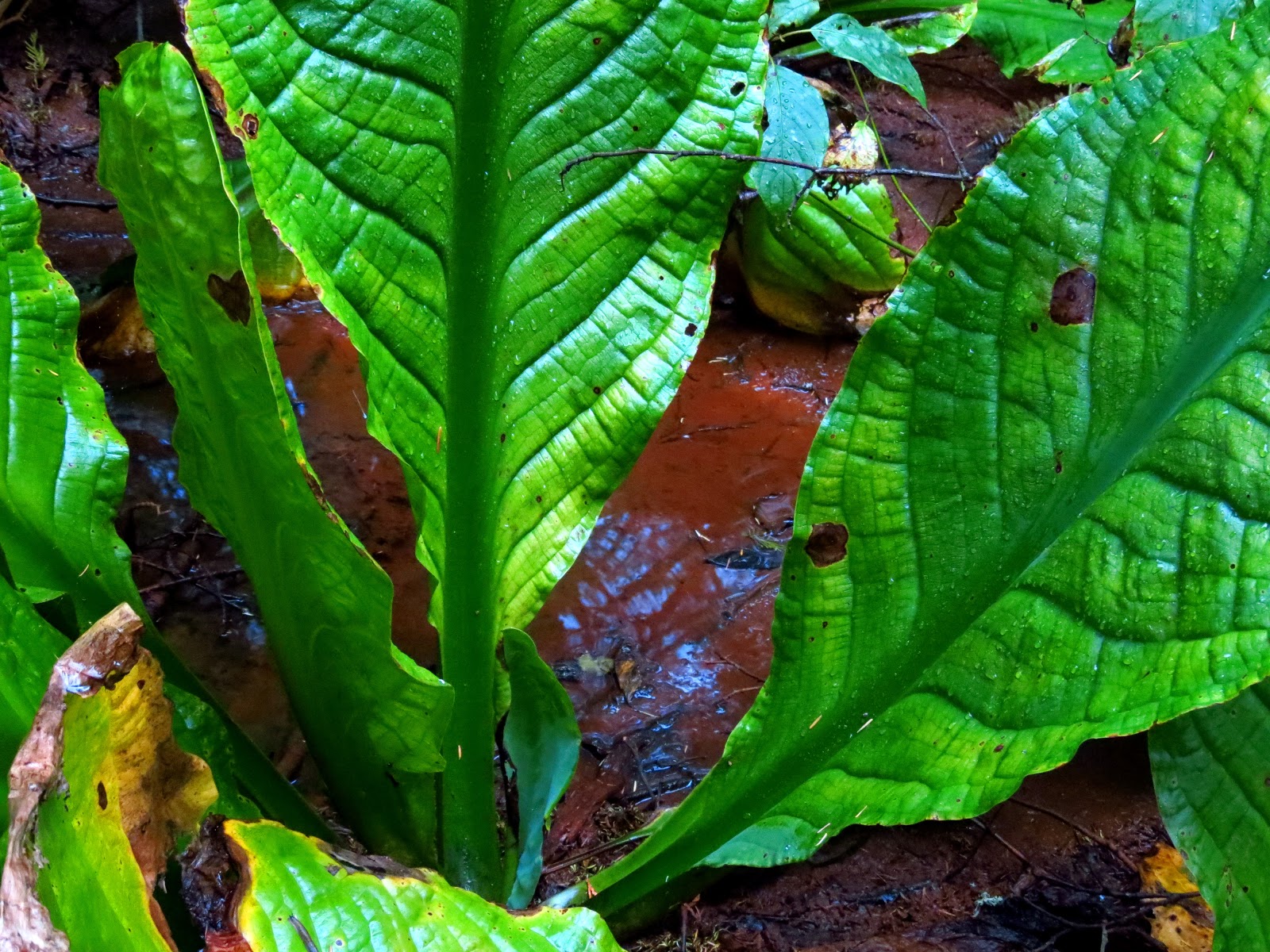 Twenty-four years ago, my father took me to a stream in British Columbia where the water flowed red with tulmn (red ochre). Before that, he learned about the tulmn deposit from a Yakama tribal elder who ironically, traveled hundreds of miles outside of her direct cultural area to collect the red earth from that specific stream bed.

To be honest, I once regarded the tulmn river as a curiosity of nature or an interesting side show to our vacation. However, after my father passed, I felt an inexplicable longing to return. In time, I came to realize that my father showed me something important that I failed to appreciate in my youth.

Years passed, but I never got the chance to return, until now.

This week, a close friend helped me remember the general location, and my friends from the Colville Tribes arranged transportation for my daughters and me.

When we arrived in the general area, nothing looked the same as I remembered. So much can change in a quarter of a century. In particular, human development can alter the course of nature and cause the water to flow in other directions. Plants and trees can appear where once only grass grew.

At one point, the environment looked so unfamiliar that we almost turned back. But in the end, we finally parked the car, searched on foot, and quickly found a small pool of red water sitting amid the cattails and skunk cabbage. Perhaps the water flows in springtime, but now in September, the stream was reduced to a collection of muddy bogs. We were able to skim small amounts of red earth from the upper layer of the tulmn deposits.

Everything seemed different than I remember, but it was quite emotional for me to return to the sacred red ochre stream of my father. 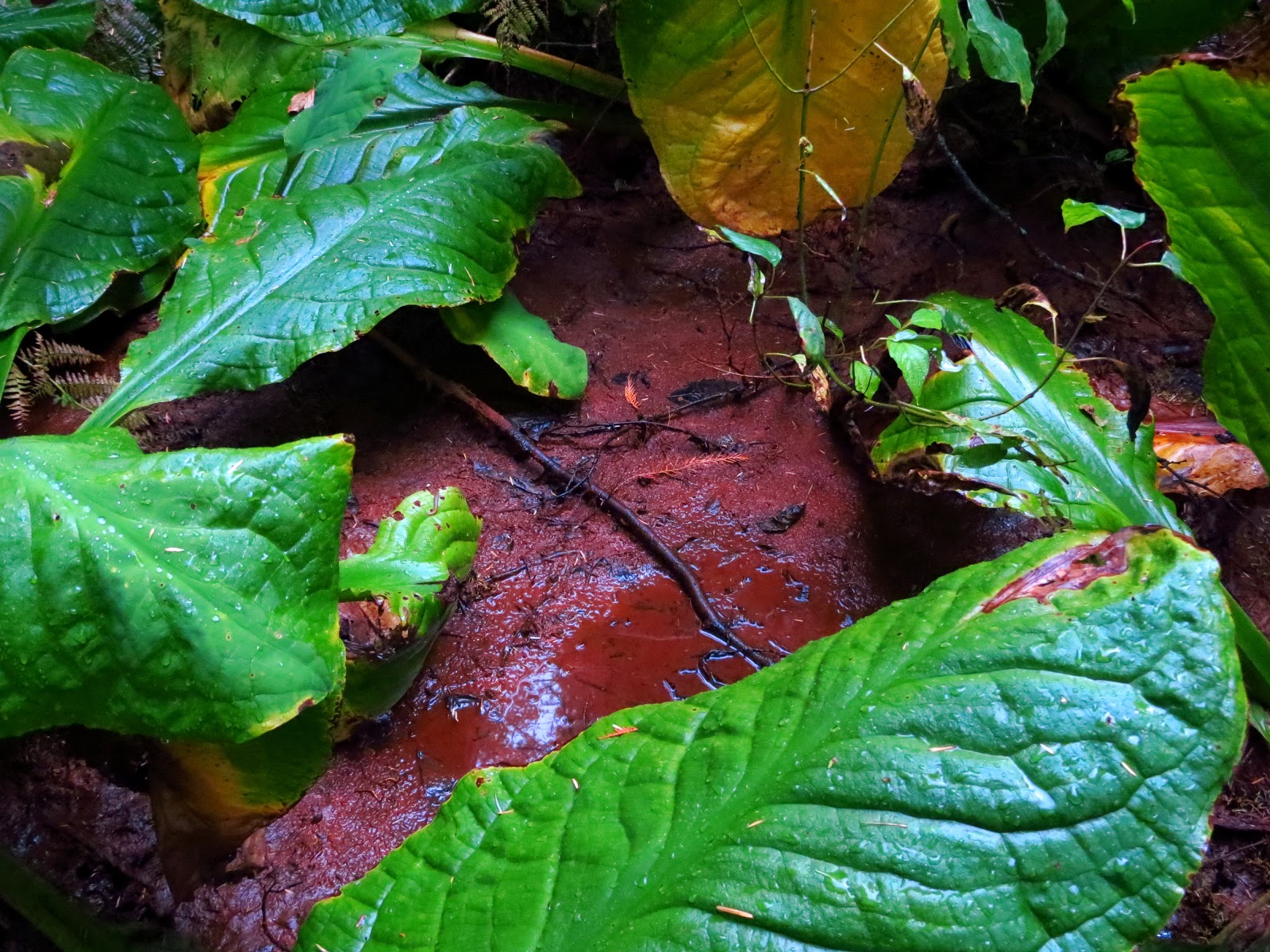 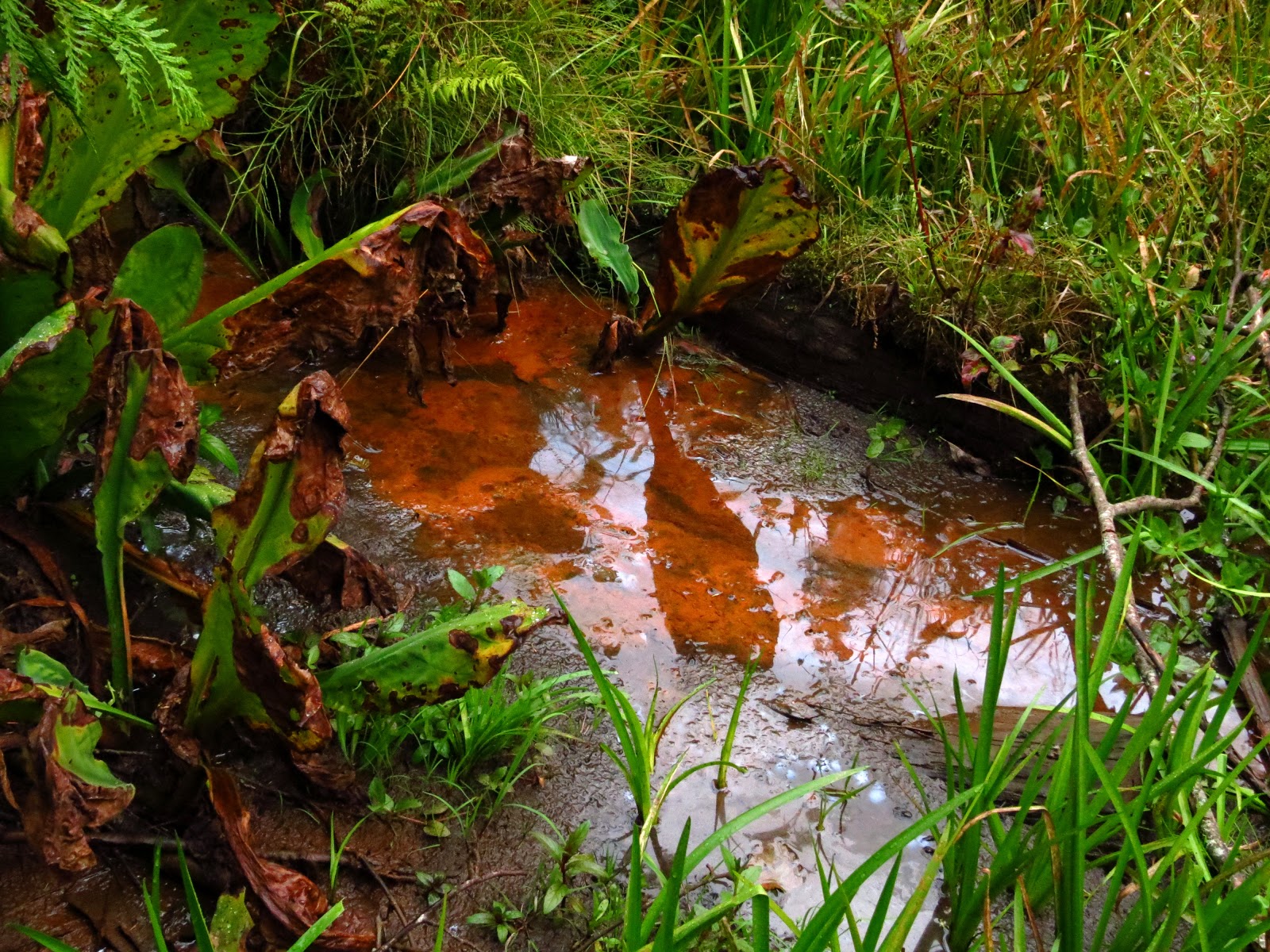 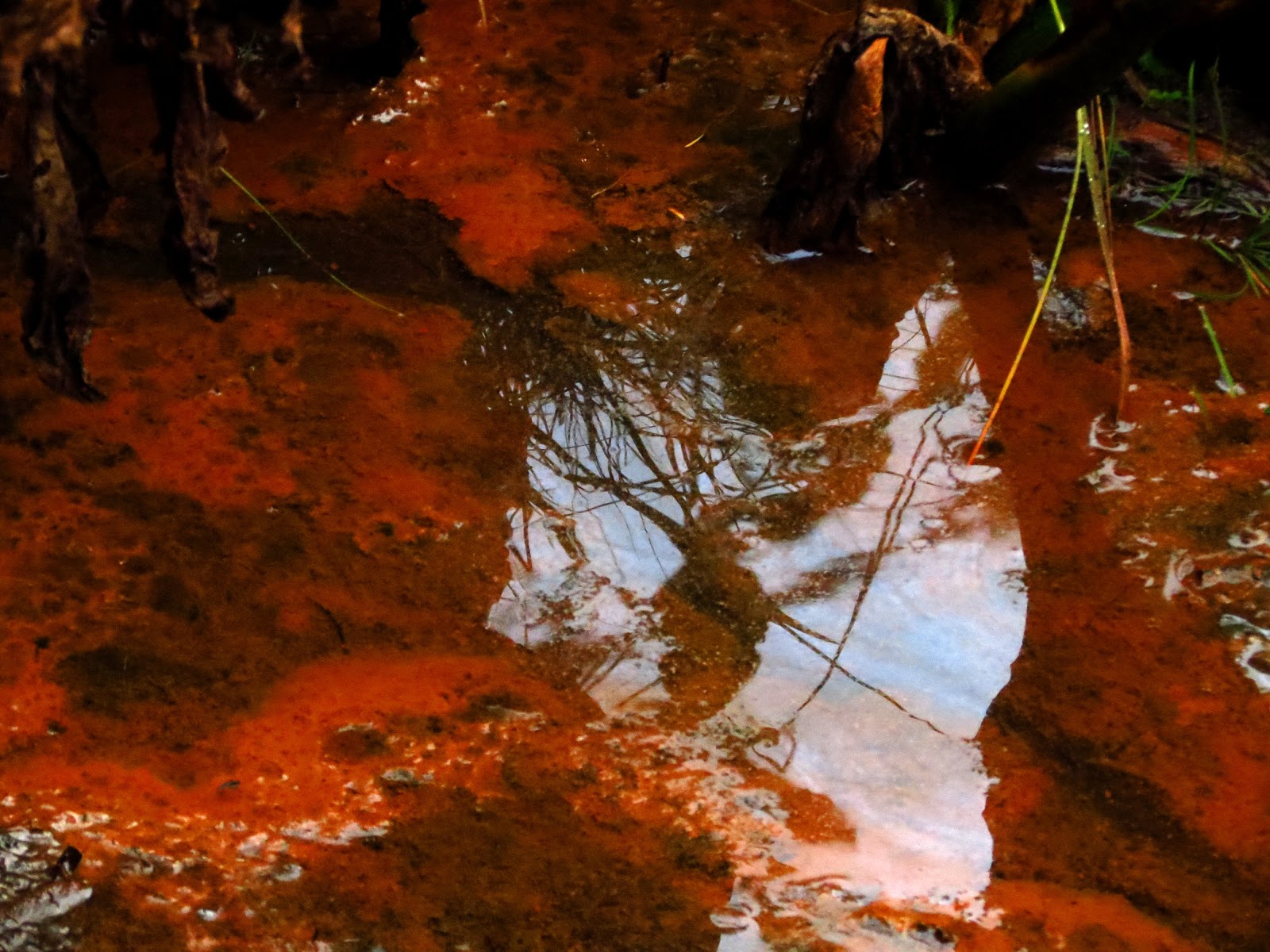 tulmnetkʷ is a word I have never seen or heard, but Salish languages allow for the creation of new words based on many possible suffixes and prefixes that can be added to a root. In this case, I used tulmn (red ochre) as the base, and added the suffix -etkʷ, meaning water. Based on this combination, tulmnetkʷ would mean 'red ochre water.'
Posted by Barry Moses (Sulustu) at 12:52 AM 1 comment: 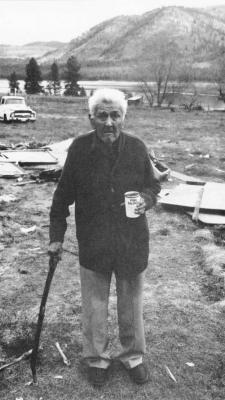 Years ago, Martin Louie took my father as a son. As a result, we usually called him Grandpa Martin, but sometimes we affectionately called him “The Old Man across the River.” Martin was an elder and spiritual leader who lived at Inchelium, near the western shore of the Columbia River. He was a colorful character, often remembered for his wisdom and humor.

From time to time, Grandpa Martin shared the most profound sayings. Recently, I found a partial transcript of his stories. The following paragraph contains an excerpt. He said:

My ancestors, my paternal grandfather and grandmother, my maternal grandfather and grandmother, they threw me out of bed, they threw me into the river, and they said to me, ‘Don’t sleep while the world goes by. If you sleep while the world goes by, all the birds will leave and go to the mountains. They will be gone into the bushes before you wake up, and the birds will see you as a bad fog surrounding your body.’

This was a story I had never heard before. In particular, the words ‘bad fog’ caught my eye as an enigmatic or mysterious phrase. I wondered about the meaning, so I decided to ask sʕamtic'aʔ – one of our fluent speakers of the Okanagan language.

She said, “xʷʔul is like steam that might come up from a boiling pot, but it’s also like what people say nowadays when they talk about an aura – it’s your energy.” In that exact moment, a two-year old boy bounded into the room and pounded a drum with a stick. sʕamtic'aʔ pointed to him and said, “x̌ast i sxʷʔuls. His power is good.”

The photograph from: The Grand Coulee: Savior For Whites, Disaster For Indians by Blaine Harden (http://aliciapatterson.org/stories/grand-coulee-savior-whites-disaster-indians).

The Salish text in this post is not 100% correct. The blog font prevents an accurate writing of the font. For a correct version, click here.

Posted by Barry Moses (Sulustu) at 4:35 PM No comments: 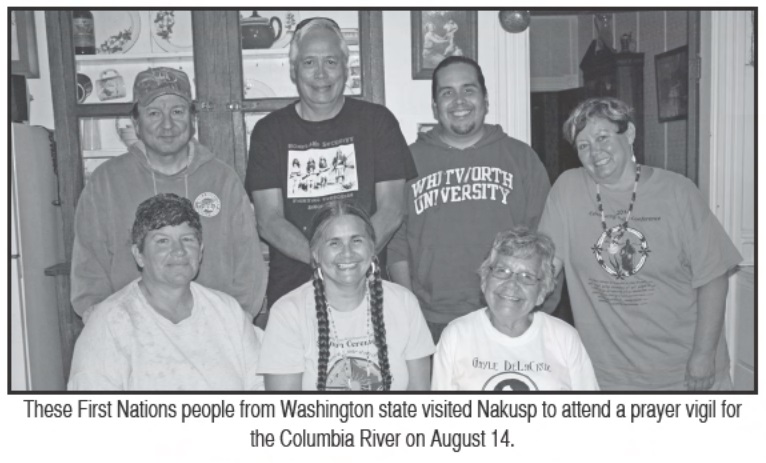 The Valley Voice, a local newspaper, reported the vigil and included our photograph (above). I was happy to read that the author also mentioned a dream that I shared during the vigil regarding the return of the salmon. Jan McMurray wrote, "Moses spoke about a dream he had where the salmon came back to the Columbia River. 'I'm hoping to see this in my lifetime,' he said."

To read the whole article, click this link, download the paper, and turn to page 3. On the same page, the Valley Voice also reported a Salish language class in Nakusp held by Shelly and LaRae. 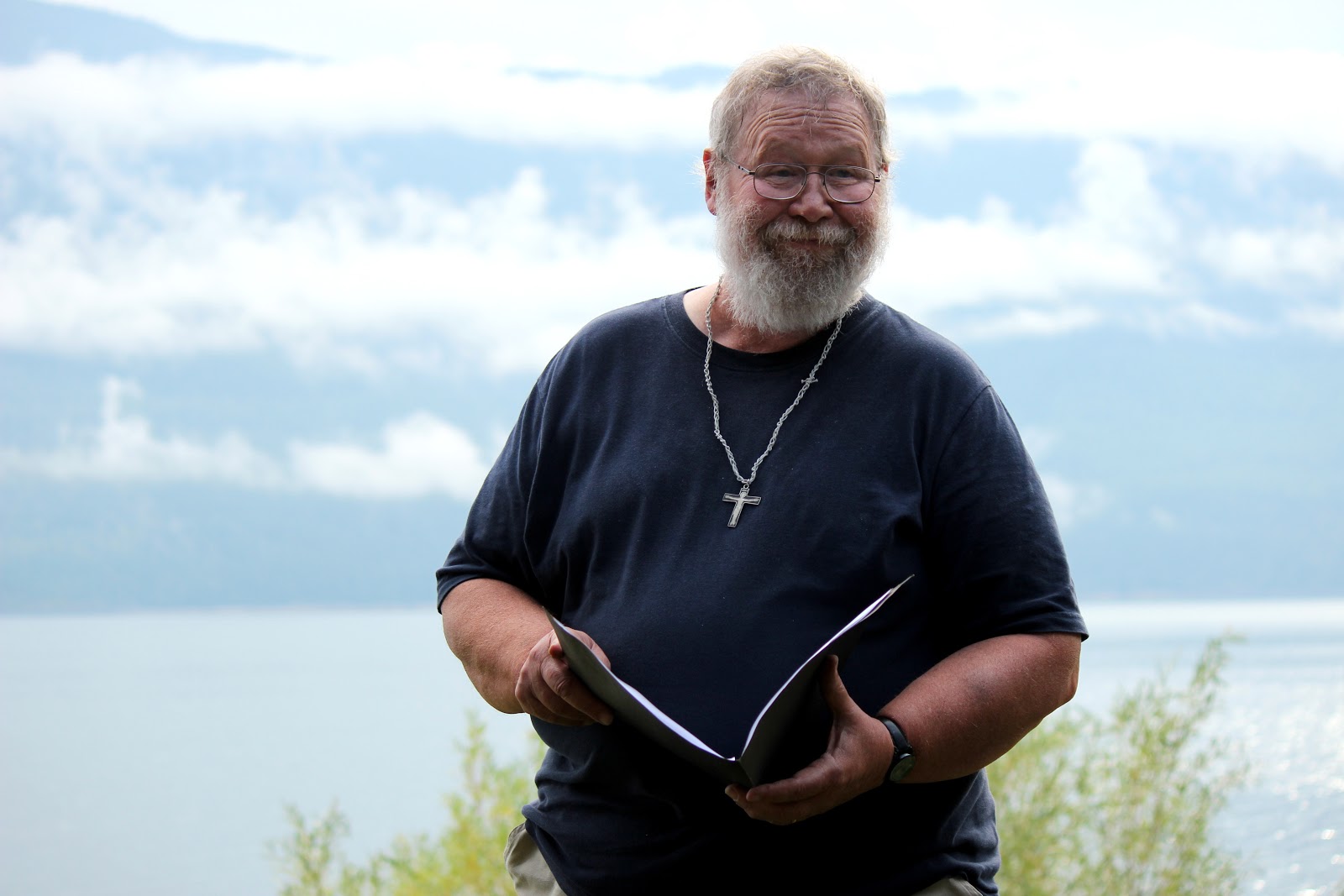 The vigil also included a pastoral letter written by the Catholic bishops of the Columbia River Watershed. The letter read in part:

The Columbia Watershed and all creation are entrusted to our loving care. As persons created in the image of God and as stewards of creation (Genesis 1-2), we are challenged to both use and respect created things. The watershed is ultimately God's; human beings are entrusted with responsibility for it, concern for its species and ecology, and regulation of its competitive and complementary uses. The watershed, seen through eyes alive with faith, can be a revelation of God's presence, an occasion of grace and blessing. There are many signs of the presence of God in this book of nature, signs that complement the understandings of God revealed in the pages of the Bible, both the Hebrew and Christian Scriptures.

The full letter may be read here. 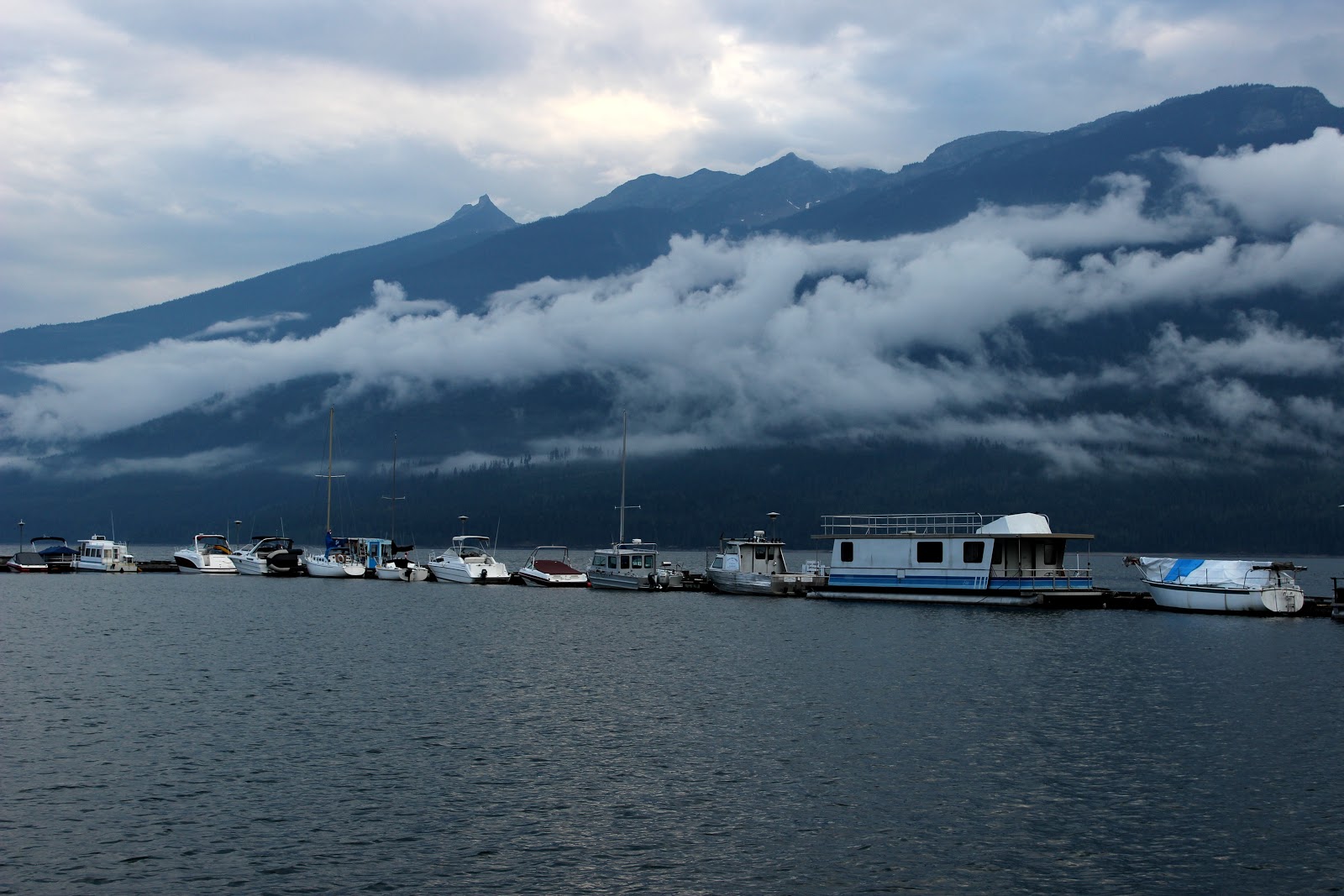 Boats in the Columbia River near Nakusp. 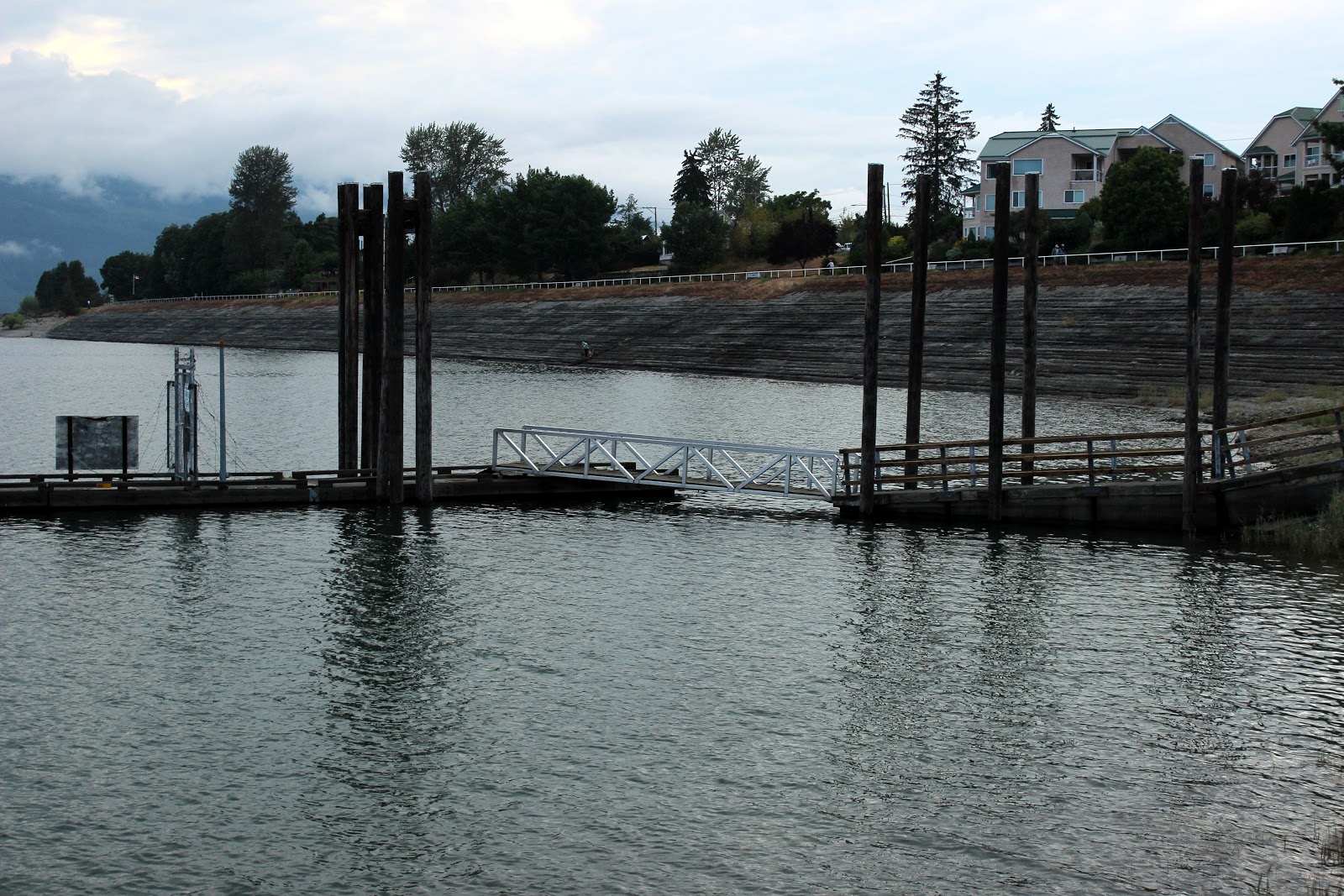 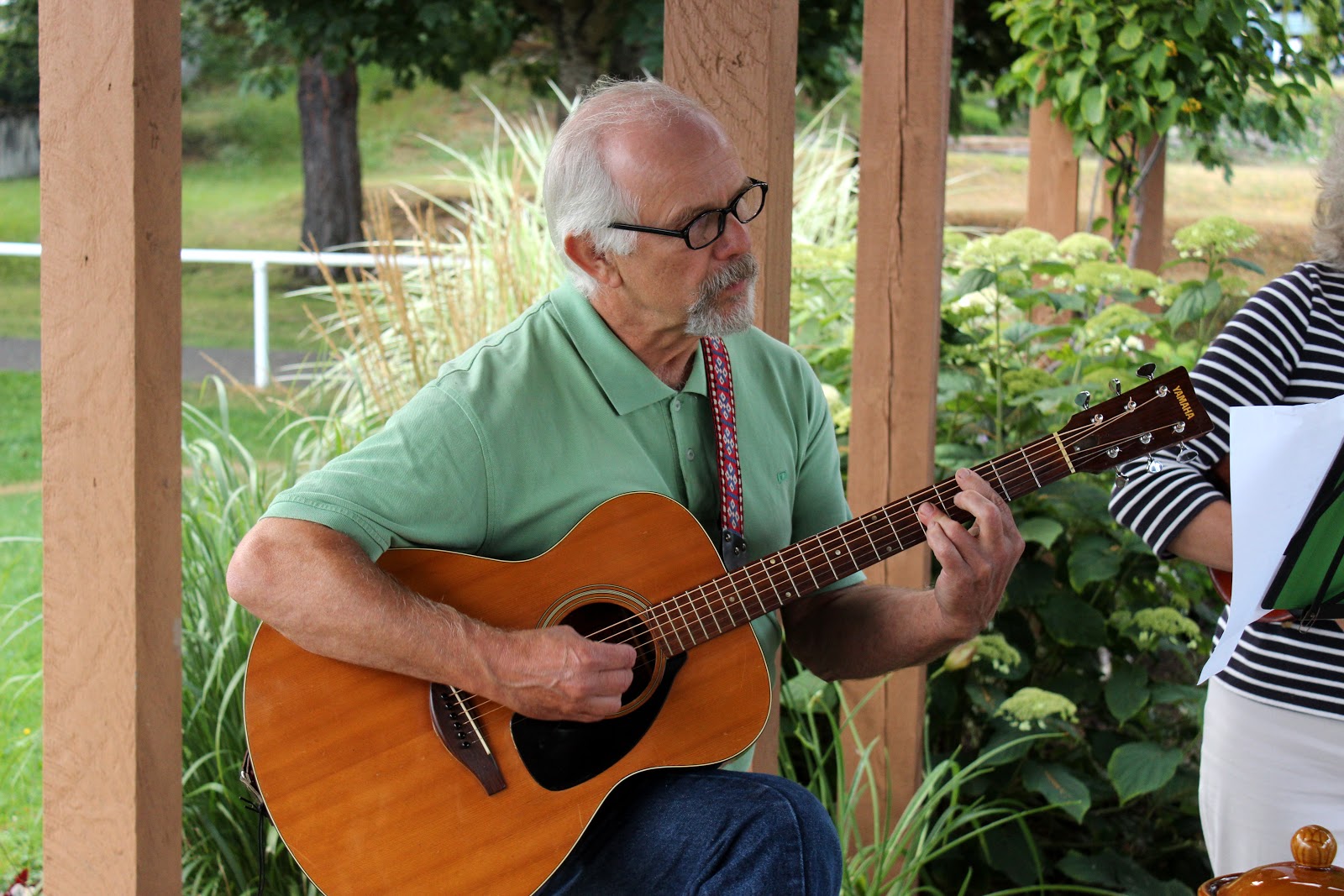 Musicians participated in the prayer vigil. 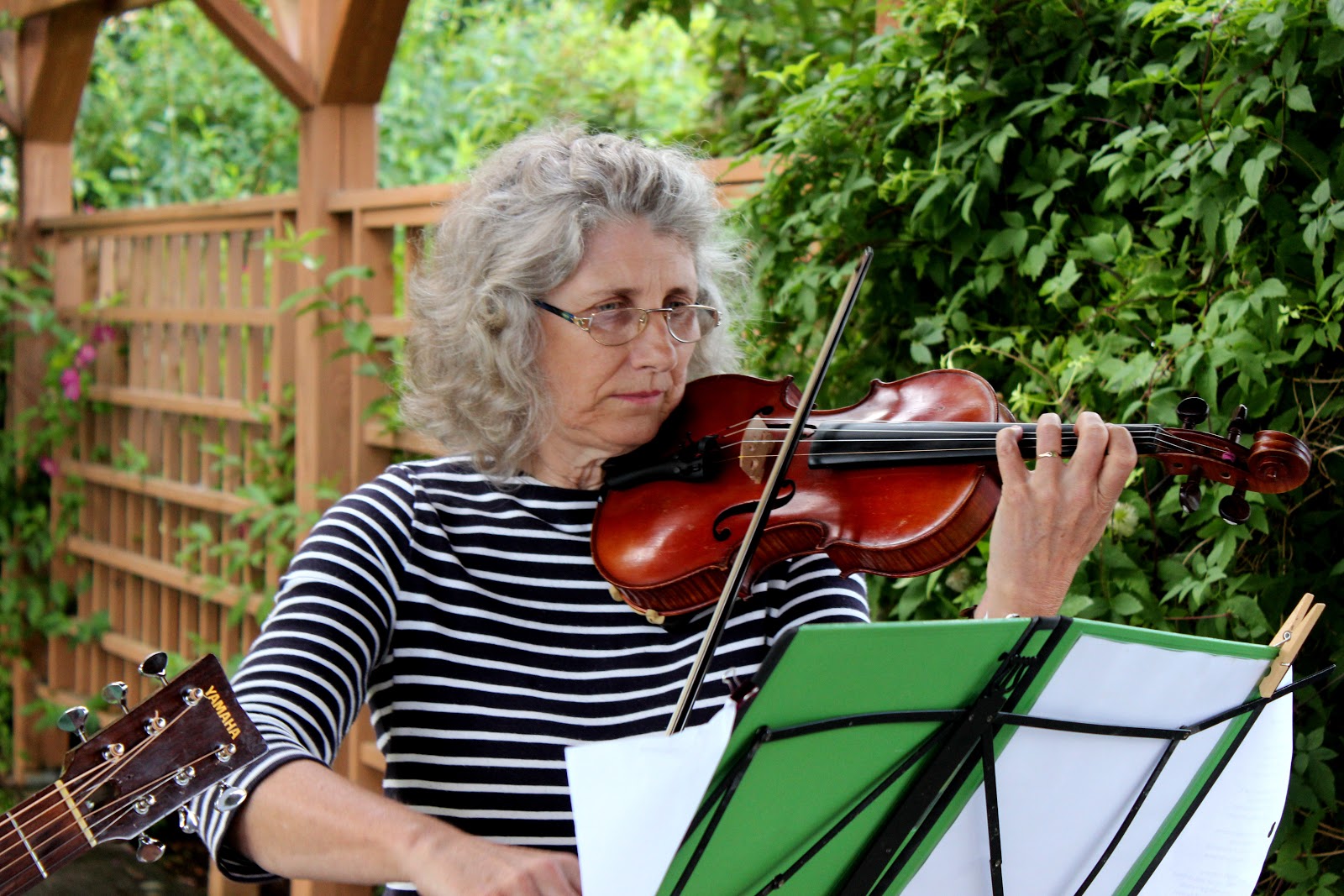 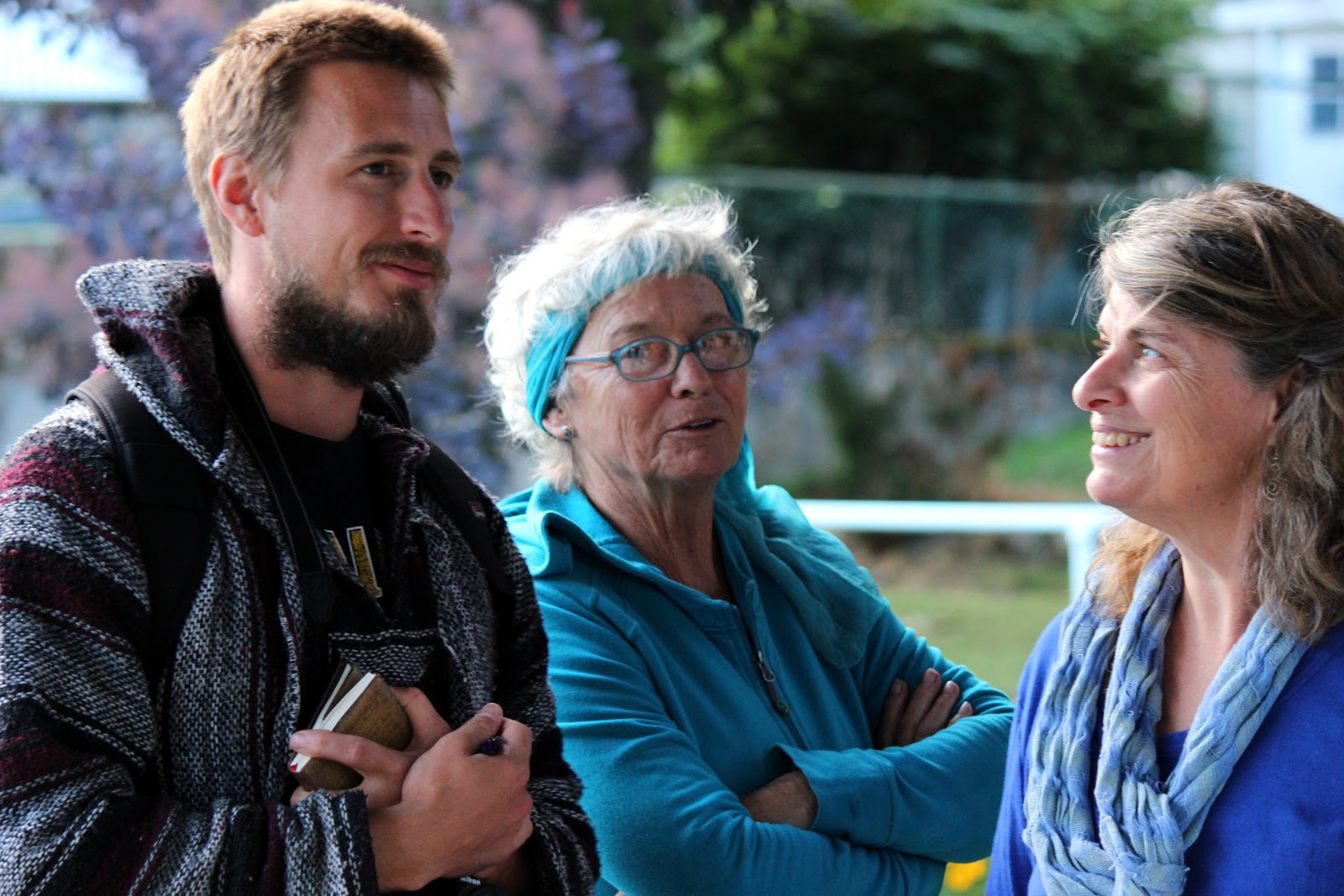 Members of the community gathered. 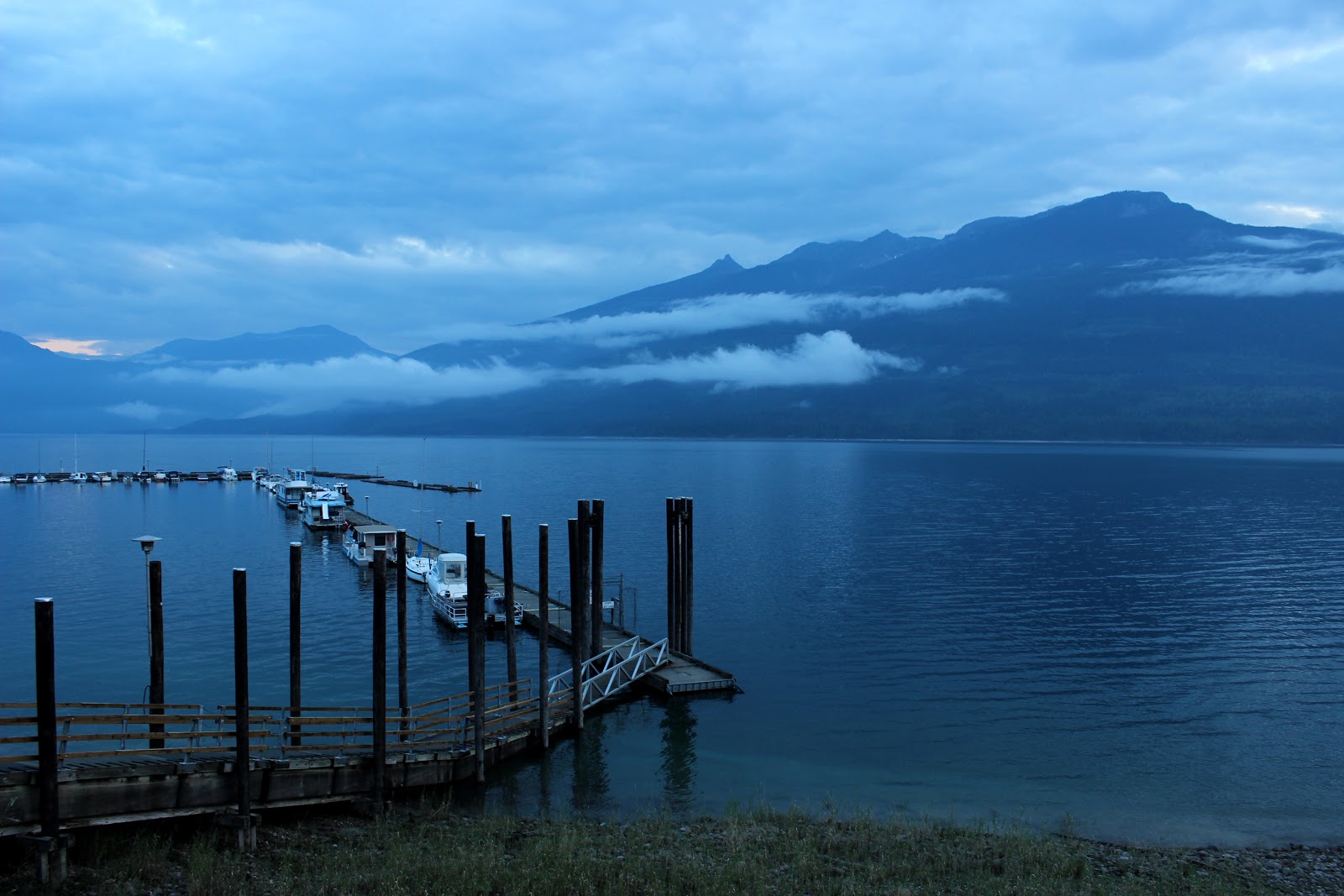 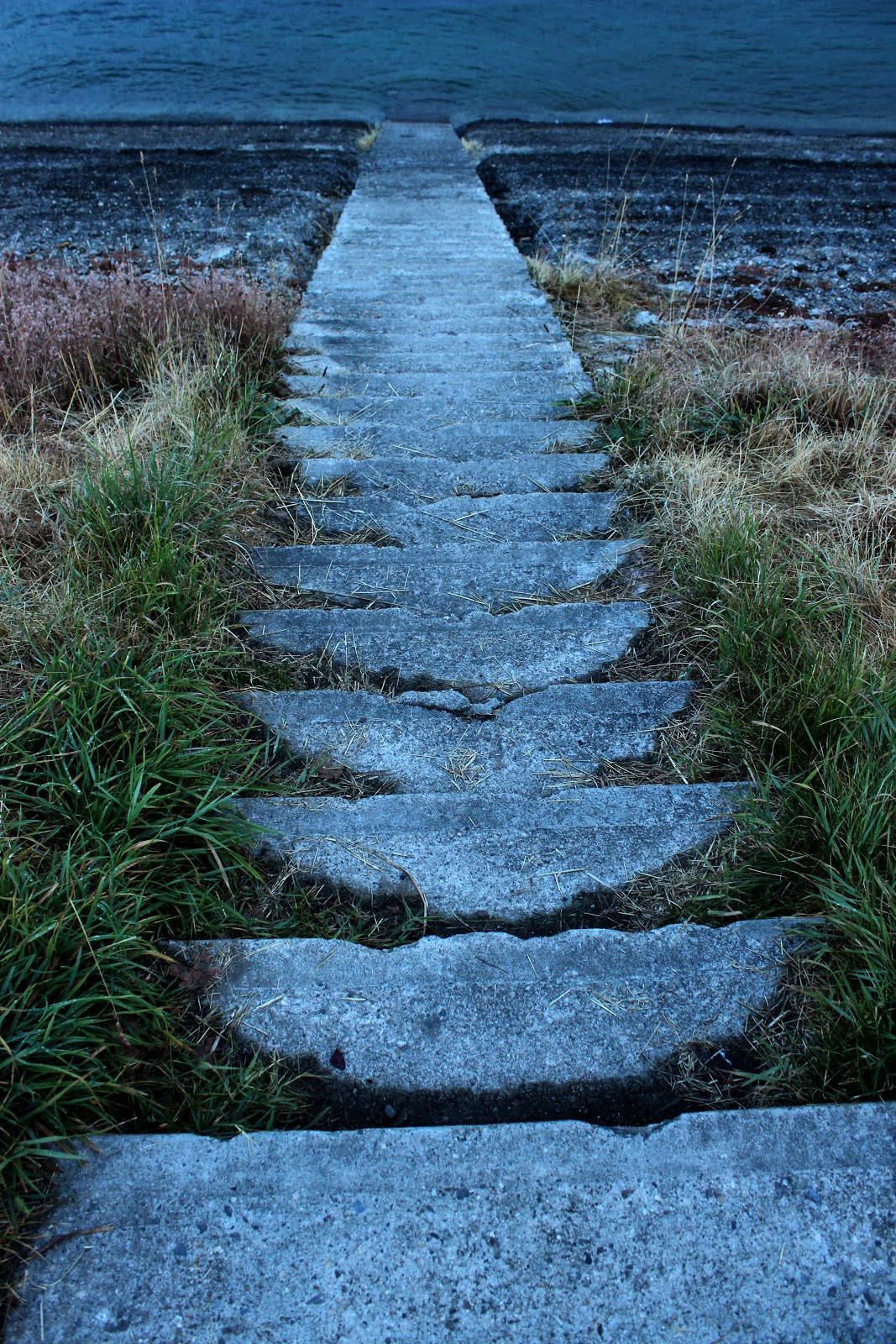 Concrete steps lead to the water. 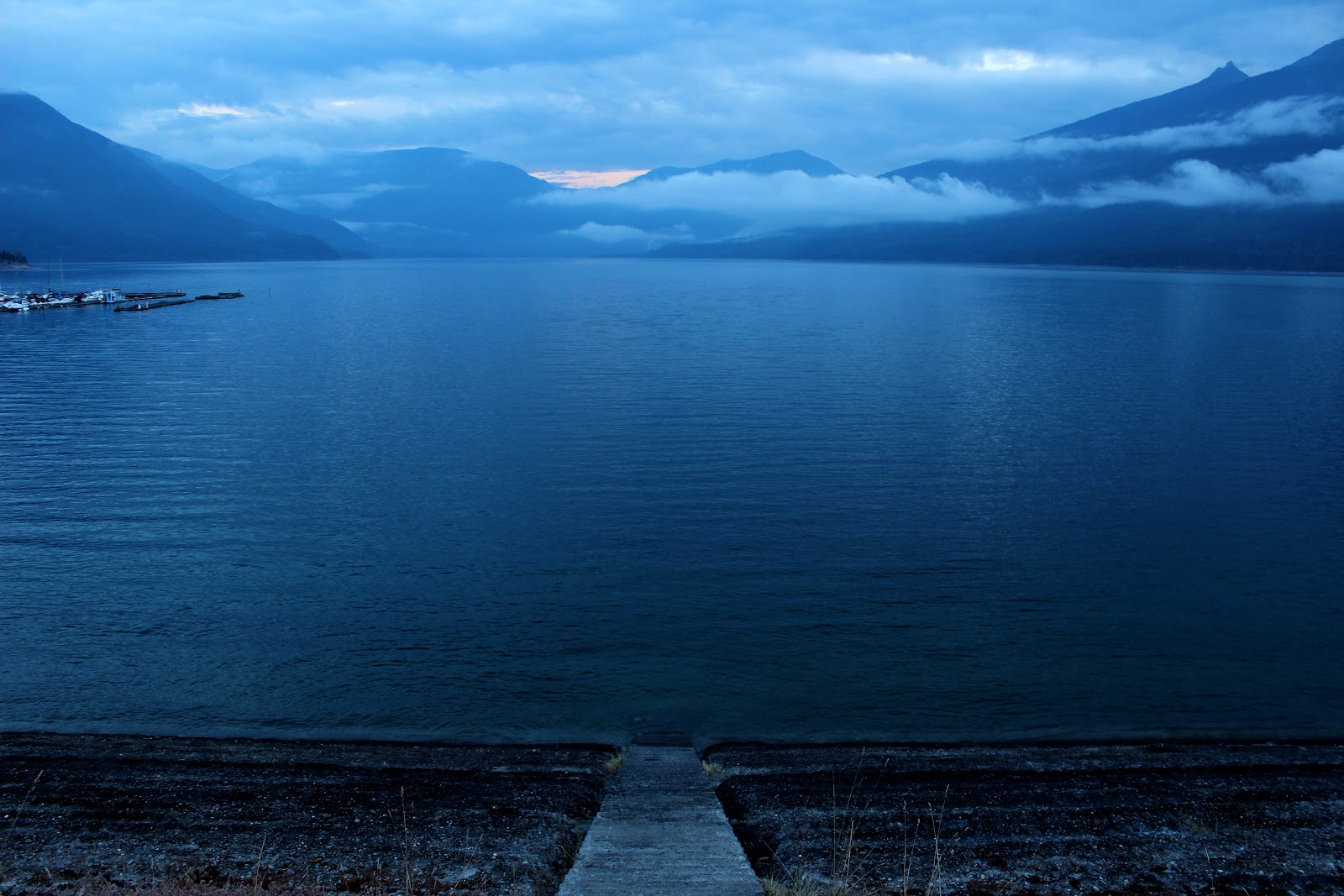 The mountains tower above the water.
Posted by Barry Moses (Sulustu) at 12:02 AM No comments: