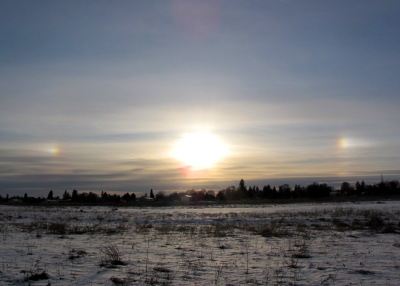 Several days ago - I think it was last Friday - I was driving home from Spokane Community College, when I saw a pair of sundogs or parahelia on either side of the setting sun. Perhaps it's odd to say, but I feel a certain excitement when I witness natural phenomena in the sky. I might even say that I feel a sense of purpose or kinship from the signs above us.
This event got me to thinking, "Is there a Salish name for sundogs?" Sure enough, Father Giorda's Kalispel Dictionary of 1879 says that the Kalispel word for sundogs is: sololágani.
As I have mentioned before, the priests used a different phonetic system than we use today, which sometimes creates ambiguity around the true pronunciation of old words. This is especially true if the words have fallen into disuse. Short of finding someone who might remember, we are left to speculate regarding the true pronunciation and etymology.
In my attempt to discover the pronunciation and underlying meaning of sololágani, I looked for other words in the dictionary that begin with the same prefix "solo." I found only two: sololímalks and sololominch. Both words have reference to iron, and in particular, the second word refers to an iron weapon or a gun of any kind. This gave me a starting place for a possible pronunciation.
In the Spokane Language, a gun is called: sululminč, so if the same pattern holds, sololágani would be written sululáx̣ni.
This creates several possibilities with regard to its meaning or literal translation.
The first possibility might have some relationship to the same root word as iron. It is my impression that iron gets its Salish name from something that burns - hec ulpmi. This would probably have reference to the process of smelting iron. Also, -ax̣n is a suffix that makes reference to the arms. Therefore, the name for sundogs might indicate something with burning arms or a burning fire near the arms of the sun. Very often sundogs do appear as two smaller suns at the sides (or arms) of the true sun.
Other possibilities probably exist, but as of this moment, this explanation is my favorite candidate. But then again, maybe someone will tell me otherwise.
In any case, this leaves me with one final question. What did sundogs mean within our traditional stories? What did they mean within the cultural stories of Europe and elsewhere?
Posted by Barry Moses (Sulustu) at 1:09 AM

Email ThisBlogThis!Share to TwitterShare to FacebookShare to Pinterest
Labels: Nature, Salish, The Sun