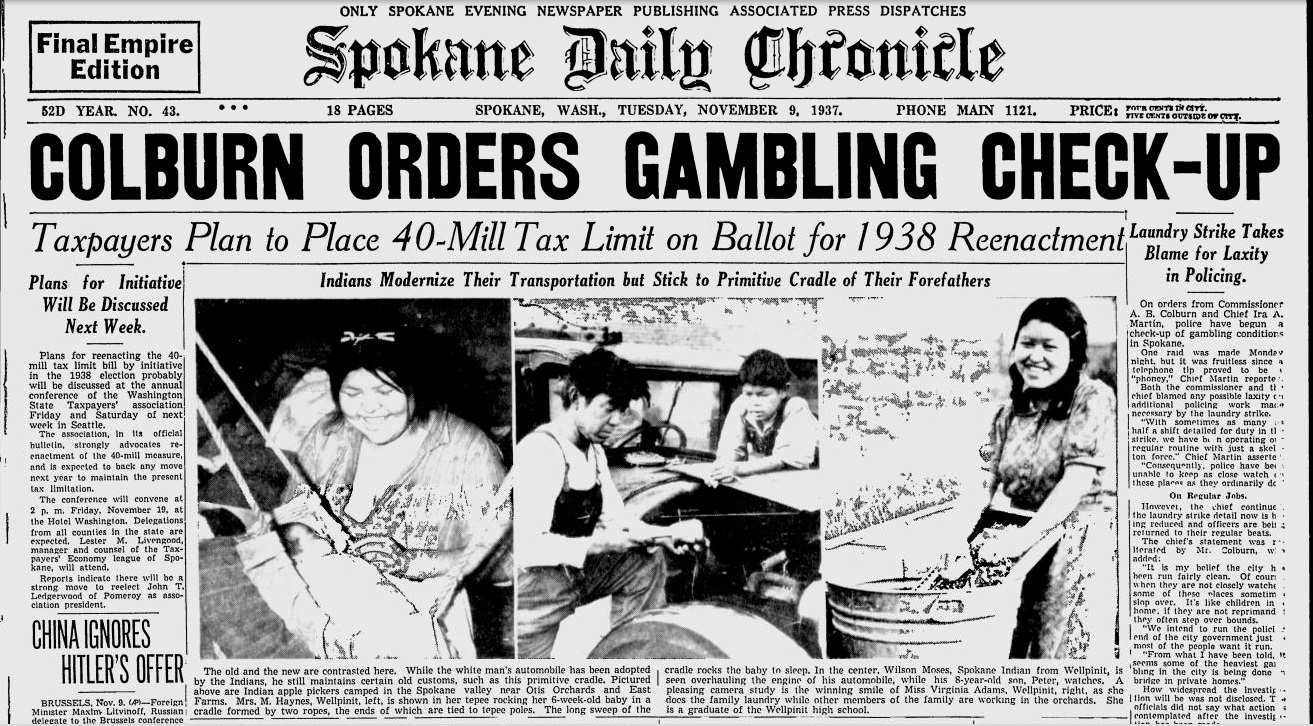 Recently, my auntie Iva recounted the story of the old Moses home site on Little Baldy, near Hillyward, Washington, and as mentioned in a previous post and a video, she was born in a cabin in the family camp. She reported that my great grandparents Wilson and Lizzie Moses, along with a dozen other Indian families, made several camps in the Spokane area.

As far as I know, the Little Baldy camp was never mentioned in any written historical record, but the Spokane Daily Chronicle confirmed the existence of other camps.

On November 9, 1937, the Spokane Daily Chronicle featured a front page photograph of my great grandfather Wilson Moses and two of his children Messie and Pete. The article reported that the family were picking apples in Otis Orchards.

"The old and new are contrasted here. While the white man’s automobile has been adopted by the Indians, he still maintains certain old customs, such as this primitive cradle. Pictured above are Indian apple pickers camped in the Spokane Valley near Otis Orchards and East Farms. Mrs. M. Haynes, Wellpinit, left, is shown in her tepee rocking her six-week old baby in a cradle formed by two ropes, the ends of which are tied to tepee poles. The long sweep of the cradle rocks the baby to sleep. In the center, Wilson Moses, Spokane Indian from Wellpinit, is seen overhauling the engine of his automobile, while his 8-year-old son, Peter, watches. A pleasing camera study is the winning smile of Miss Virginia Adams, Wellpinit, right, as she does the family laundry while other members of the family are working in the orchards. She is a graduate of Wellpinit High School." 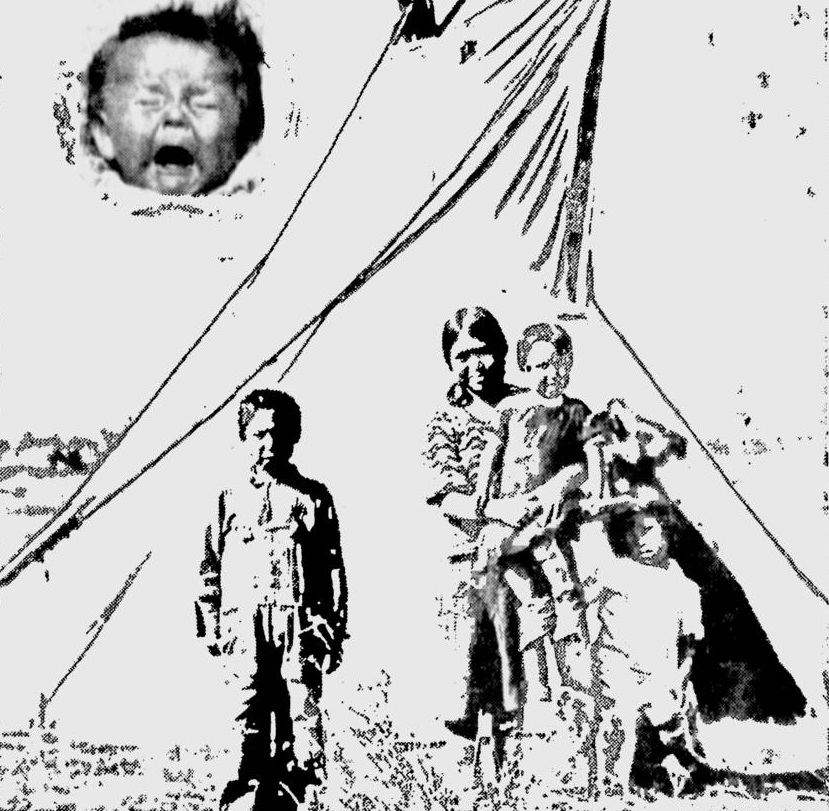 "To get a real close-up of how the present-day Indian lives when he and his family take to the open road in search of seasonal labor, one has but to drive out into the Spokane valley, particularly along Trent road near Otis Orchards. Here the Indians are busy in orchard work. Spokanes predominate, with a few Colvilles and Coeur d’Alenes sprinkled about. No white man has ever been able to improve on the Indians' tepee and several of this type are found in two camps. The photo shows of the children of Louis Thomas, Wellpinit, in front of the family’s temporary home near the Sweeney packing house, where Indian children almost outnumber the adults. The inset shows the crying face of Baby Levi Moses, who didn't like the looks of the camera pointed in his direction." 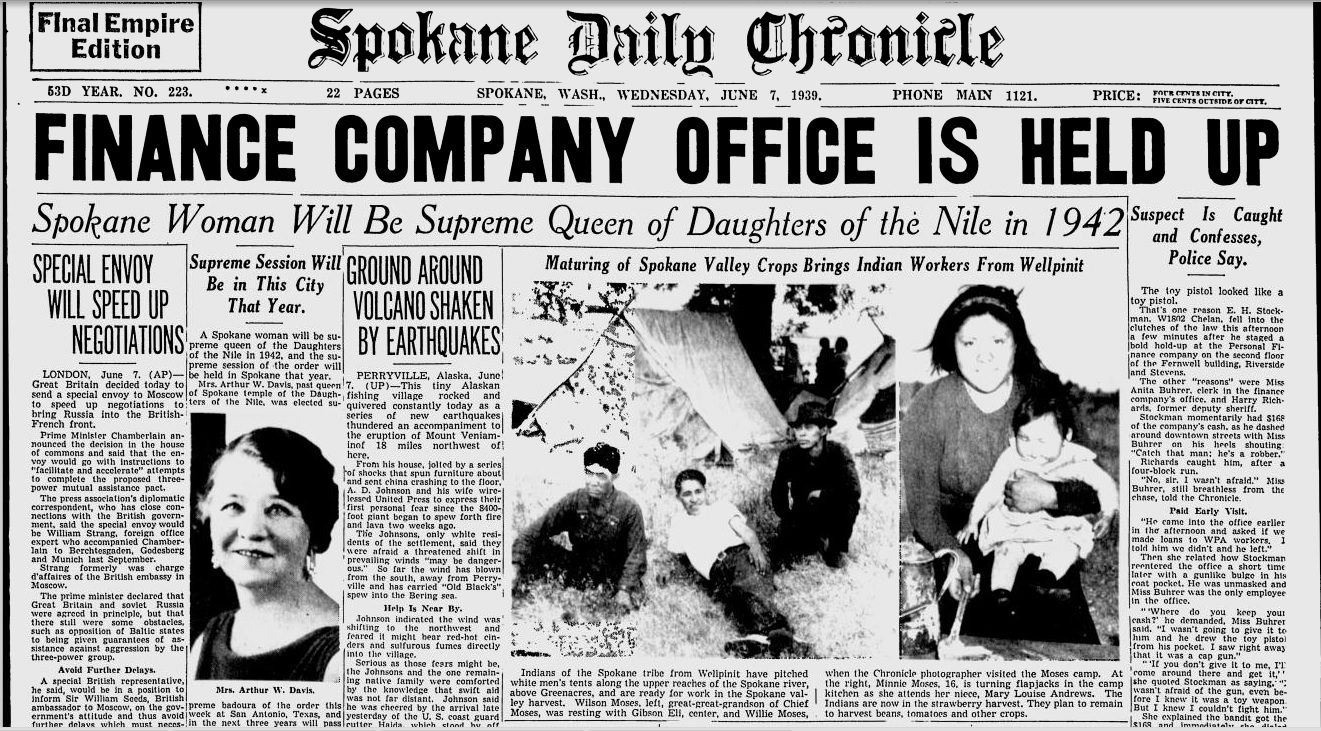 On June 7, 1939 the Chronicle confirmed another camp near Greenacres, this time featuring a photograph of my great grandfather Wilson Moses, my great uncle Willie Moses, and my paternal grandparents Gibson Eli and Minnie Moses. 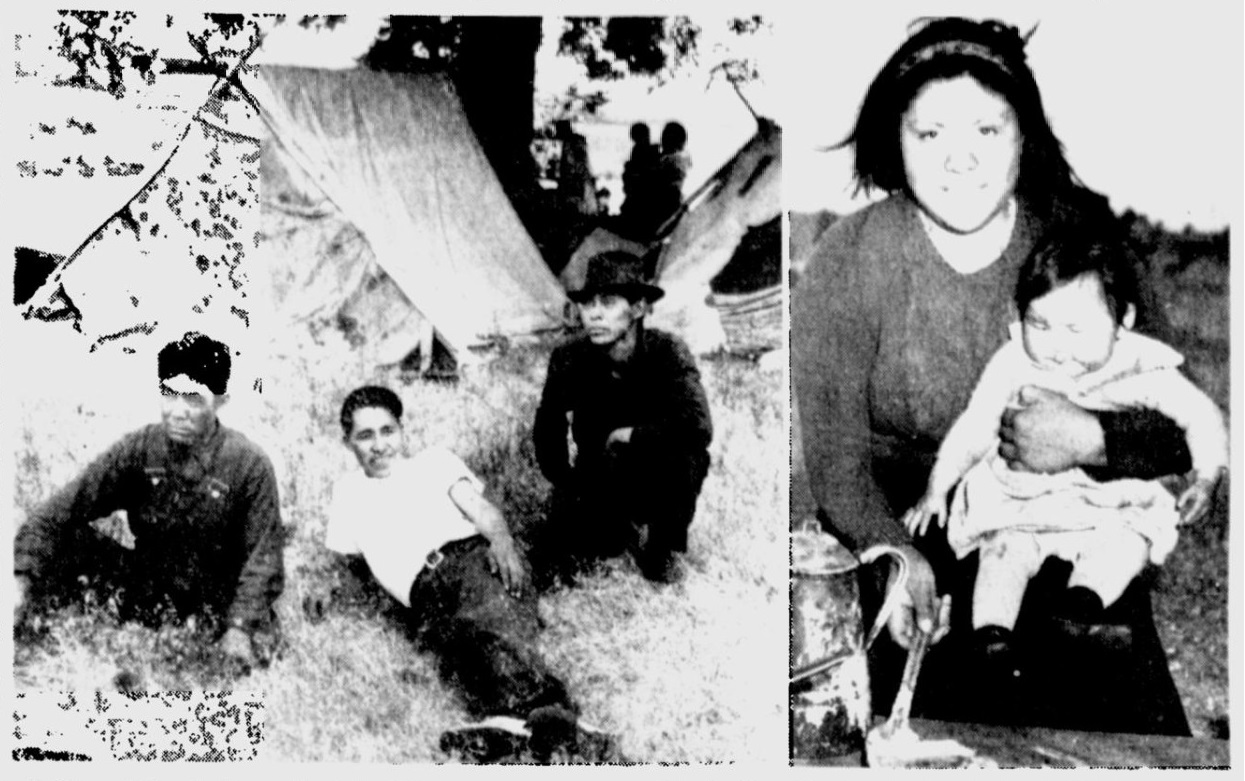 "Indians of the Spokane Tribe from Wellpinit have pitched white man’s tents along the upper reaches of the Spokane River, above Greenacres, and are ready for work in the Spokane Valley harvest. Wilson Moses, left, great-great-grandson of Chief Moses, was resting with Gibson Eli, center, and Willie Moses, when the Chronicle photographer visited the Moses camp. At the right, Minnie Moses, 16, is turning flapjacks in the camp kitchen as she attends her niece, Mary Louise Andrews. The Indians are now in the strawberry harvest. They plan to remain to harvest beans, tomatoes and other crops." 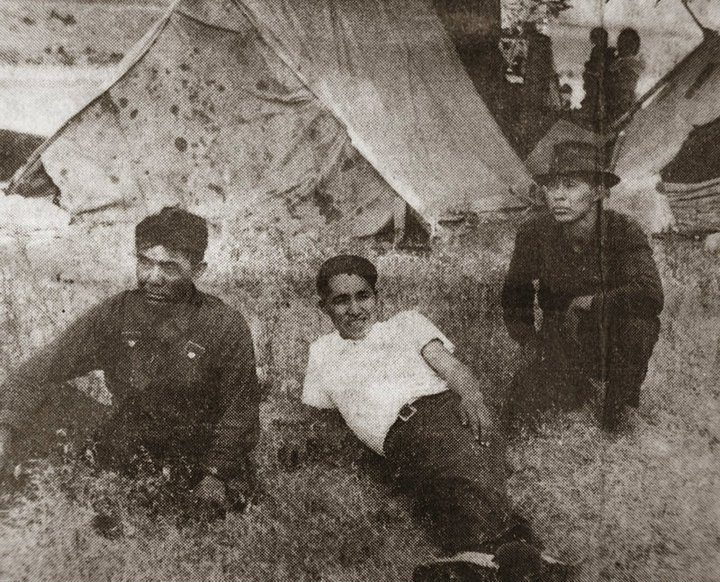 These articles were located in the Google news archive. The photographs were not very clear, but for some reason, I have copies that look slightly better. 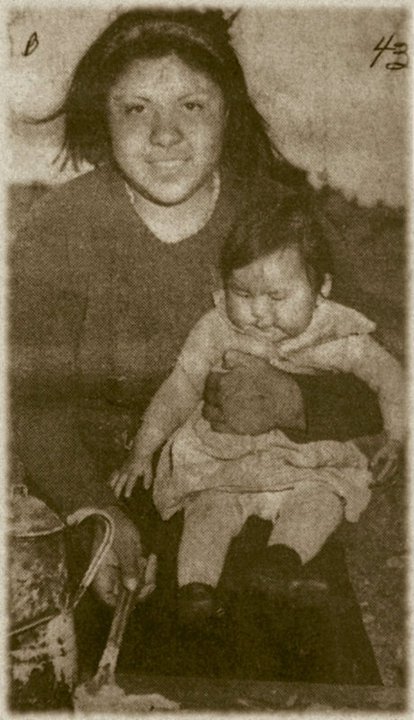 My grandmother Minnie Moses at age 16.
She was holding Mary Andrews,
my auntie Iva's sister.
Posted by Barry Moses (Sulustu) at 7:41 PM