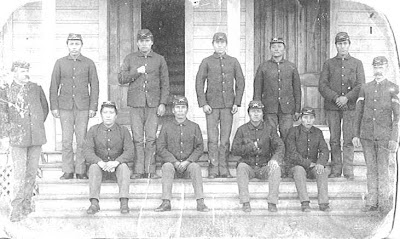 During the late 1800s, the United States embarked upon a misguided social experiment to "civilize" the Indian people by creating special military units comprised entirely of Indian recruits. Government officials hoped to solve what they called the "Indian problem," and expected that Indian soldiers would learn to live as whites under the discipline of military commanders.
At Ft. Spokane, the US Army recruited a handful of Spokane Indians under the direction of Captain George O. Webster, and named the unit "Company I."
My great great grandfather Steven Moses enlisted in "Company I" and was pictured above. The Indian members of the unit were (standing, left to right): Oliver Lott, Louie Peone, Peter Martin, Steven Moses, and Jesse Metou. (Sitting left to right): Jim Fry, Peter Joe, Que-pa, and Joe Roos.
Regarding the Indian recruits, Captain Webster once remarked, "I could talk to you for two hours upon this subject and then leave many interesting facts about the experiment untold. The men I have so far enlisted are from Chief Lot's tribe. At first they were very averse to enlisting as soldiers, but Chief Lot was anxious that his son should become a soldier and made him and a little band of his followers a speech in which he earnestly entreated them to join the army. Finally Lot's son consented and a number of young Indians present at once consented to follow.
"Lot speaks a little English, but the others understand hardly a word of the language and consequently we labor under great disadvantage in teaching them the military exercises."
Captain Webster later described the recruits as "exemplary and obedient in every respect," but historians would later disagree. In the book The Spokane Indians: Children of the Sun, authors Robert H. Ruby and John A. Brown wrote, "Official records show that most all, in turn, were AWOL, causing them to forfeit portions of their pay. A number deserted. The experiment was such a failure that the company of seventeen, twelve of whom were Spokanes, was discharged by special order on August 2, 1893."
Historians called the Indian company a failure, but in this case, failure is a good thing. It means that our ancestors retained their Indian identity in the face of extraordinary pressure to assimilate. Ultimately, their failure is our success as a people.
Sources:
Our Redskin Recruits. (1891, November 27). Spokane Daily Chronicle.
Peltier, J. (1981, January). A Brief Historical Sketch of Fort Spokane. The Rawhide Press , p. 18.