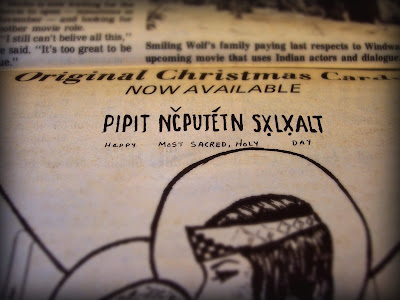 The recent winter solstice caused me to reflect on a Salish version of words related to Christmas. Obviously, Christmas was not originally an indigenous concept, but the majority of our people have accepted it, and Christmas is now an inextricable feature of our cultural landscape.

The Montana Salish dictionary described Christmas as nwel, which would seem to arise from a French influence.

The Spokane Dictionary did not provide a translation for Christmas; however, an old Rawhide Press from the late 1970s advertised Salish Christmas cards with the following inscription: pipit nčputetn sxlxalt (happy most sacred, holy day).
Posted by Barry Moses (Sulustu) at 1:47 AM