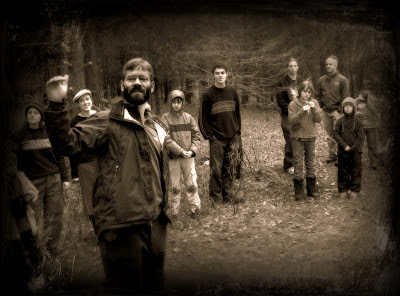 Recently, I took a trip down memory lane and read some of my old journals from when I met Tim and Jeannine at the Bioneers Conference. According to my journal, that all happened on October 20, 2007. On November 10 of the same year, they invited my family to a fall harvest gathering near Sandpoint, Idaho. (This photograph was taken during the November gathering).

Strangely, the day after we met at Bioneers, I felt compelled to write my first impressions in my journal. At one point, I directed my thoughts toward Tim, as if I were writing a personal letter instead of a private diary. I wrote, "You're searching for something, and hoping perhaps I may hold something in trust for you. And perhaps I do hold something from a previous time... but it's not mine, really. I simply hold something you misplaced or forgot many years ago."

In my journal, I also mentioned that Jeannine introduced herself and said that we had spoken before. I did not remember meeting, but I later wrote, "I remember you now, and as I look upon your face, I remember something much deeper." She was holding their son River in her arms. Actually, River's eyes are my strongest visual memory from that day. Regarding River I wrote, "I'm sure we met in another lifetime, maybe 10,000 years ago or more."


Six years later, it is strange to look back and see how this relationship has evolved. It is even more strange that I even thought to write my first impressions of that meeting. It all makes me wonder what things were set in motion on that day, or maybe what things finally reached the surface.
Posted by Barry Moses (Sulustu) at 11:39 AM