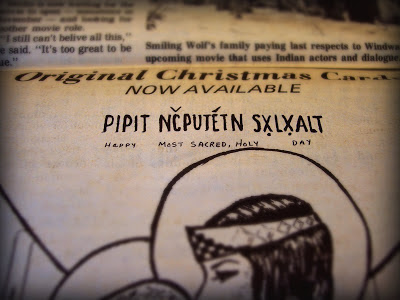 This post was inspired by a question from a Facebook friend. I recently blogged a photograph of the Sacred Heart of Jesus, and she asked, “What is the [Salish] word for sacred or holy?” Many times, the exact meaning of a concept does not translate into other languages. I suspect the same is true of “sacredness” in Salish. As will be seen, this word makes a wide variety of renditions in the language.

When the Jesuits translated prayers and hymns into the Salish language, they often used different words to describe the same concept. For example, they used the word xest (good) to describe something sacred, as evidenced in the hymn “Sacred Heart of My God.” This was translated as: “xest spuʔus in k’ʷl’ncutn” . Other times, the Jesuits used a Latin base to describe something saintly or holy, especially if the term referred to a name, as in “Holy Mary Pray for Me.” Holy Mary was called “sent mali” (p. 21).  On still other occasions, the Jesuits used the word pxpaxt (wise) to describe something sacred. A prominent example includes a translation of the Christmas hymn “Silent Night” where the first line reads, “qmqemt skʷkʷec, pxpaxt skʷkʷec” (peaceful night, wise night).

An unpublished Spokane dictionary used a different word to describe the concept of sacredness: xaʔxeʔt, translated variously as something sacred, feared, respected, or held in awe. Based on the dictionary entry, this word may sometimes refer to powerful or mysterious forces of nature.

Finally, an old Rawhide Press advertisement from the early 1980s wished readers a “Happy Christmas” with the phrase, “pipit nčputétn sxlxalt” (Happy most holy, sacred day). In this case, the root word seems to come from putʔem, referring to something respected or honored.

From all the examples, it is difficult to know which word most accurately reflects the traditional, pre-Christian concept of sacredness. Is sacredness good, wise, mysterious, feared, or respected? Maybe it’s a little bit of all of them.