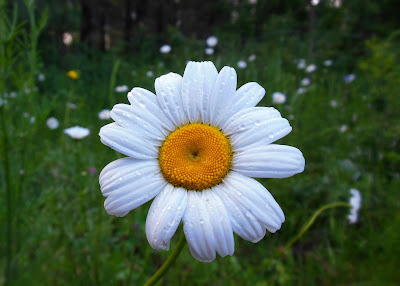 Last night I dreamed about the summer solstice.

An old man said, "Pray for the sun, because tomorrow is the summer solstice - the longest day of the year." So then a small group of men gathered together and sang to the power of the sun, and as we sang, the sun rose high into the sky and smiled.

When I awoke, I thought, "Is today really the summer solstice?" I rolled out of bed and checked my calendar. Sure enough, my dream was right.

Later in the day, I visited my uncle in Wellpinit and saw these amazing white daisies growing in the meadow behind his house. They reminded me of the smiling face of the sun from my dream. 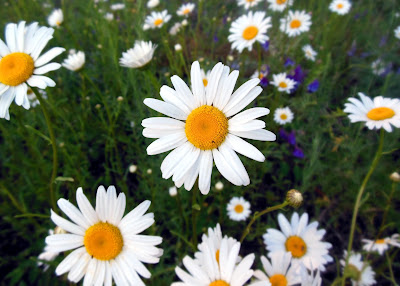 Even as I was feeling poetic about these flowers, I later learned that daisies are considered a noxious weed. They came originally from Europe and have since been naturalized in other areas of the world. In some parts of the country, they form dense colonies and displace native vegetation. They're such pretty little things. Who would have thought they could be a problem?
Posted by Barry Moses (Sulustu) at 11:59 PM

Email ThisBlogThis!Share to TwitterShare to FacebookShare to Pinterest
Labels: Dreaming, Flowers, The Sun