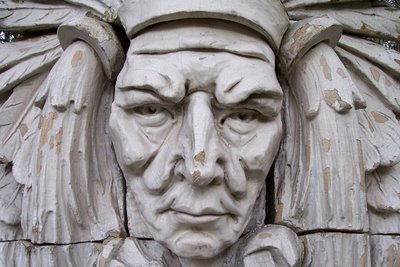 Guardian of the Spirit. 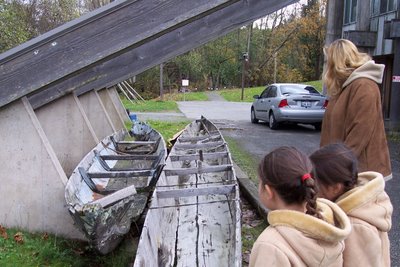 My family looking at old canoes.

After breakfast on Saturday morning, my family drove toward Discovery Park, and took a long, winding road through a grove of trees. The road ended at a place called Daybreak Star Indian Cultural Center. As it just so happened, there was some kind of event going on when we arrived where people were selling a variety of coastal Native American crafts.

Outside, we saw this amazing terra cotta Indian sculpture, salvaged from the White - Henry - Stuart Building when it was renovated in 1976 (it was originally built in 1909). The statue now stands about six feet tall and had tobacco offerings at the base. Apparently, people have begun to see some kind of spiritual significance in having this old man near the cultural center. A marker refers to this piece as the "Guardian of the Spirit."

A little later, we saw a handful of old canoes once used by the Coast Salish people. When I saw them, something quite unexpected happened to me; I literally started to weep. I'm not sure what it means, or why I felt that way, but seeing those old canoes moved me beyond words.
Posted by Barry Moses (Sulustu) at 12:51 AM