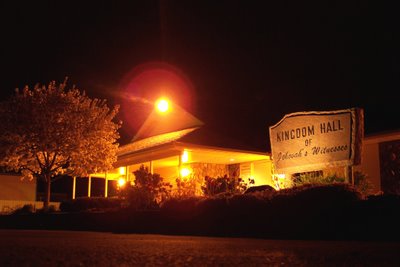 Several months ago my sister introduced me to StatCounter to help me keep track of visitors to my blog. I was impressed by the number of visitors I received from a wide range of countries, but I was also surprised by the search words entered to locate my site. For example, within 48 hours of my brother-in-law Steve Merchant's passing, I received literally hundreds of visitors from all over the world looking for more information about Steve. It was quite moving.

Surprisingly, an entry I posted regarding the Jehovah's Witnesses produced the second largest number of hits. I also received comments from opposite ends of the religious spectrum. One reader referred to Jehovah's Witnesses as "wolves in sheep's clothing," and called the Watchtower "a destructive cult of false teachings." A more sympathetic reader stated "...we TRY to live by bible standards which would thus qualify us for a heavenly life."

Frankly, I never expected to receive so much interest in either topic. In hindsight, Steve makes sense. He had friends all over the world, but Jehovah's Witnesses? I would have never thought...
Posted by Barry Moses (Sulustu) at 11:13 PM

What did you say that raised the roof Dude?! I missed that!

Please let me know at http://thejscene.blogspot.com in the comment section - thanx!

I think I raised the ire of those favorable to Jehovah's Witnesses by saying I once considered joining their movement, but thought better of it. I think I also offended those who oppose the Jehovah's Witnesses by saying I still find a soft spot in my heart for those who preach door to door. I guess this is one of those issues where people don't like you to walk the middle line. Go figure.

I respect your viewpoint; you got the right to make your own informed decisions...

Keep investigating and seeing for yourself - Peace Out!


This website summarizes 300 United States court cases and lawsuits affecting children of Jehovah's Witnesses, including dozens of cases where the Parents refused to consent to life-saving blood transfusions: