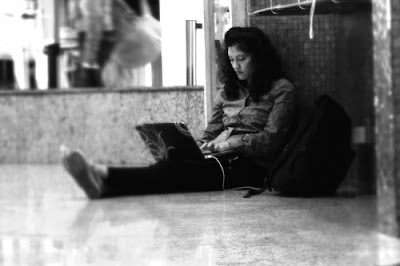 Rosi is a fiery, independent, and energetic young woman from Peru. 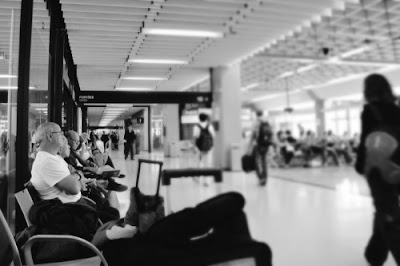 Carlos and Mirza wait patiently in the São Paulo terminal.

Before embarking on my journey to Peru, I was selected to join this year's cohort of the Leadership Development Program, sponsored by the Community Colleges of Spokane. After an opening retreat, we will gather one day a month to address issues of leadership, community, and professional renewal.

As part of our leadership curriculum, we have examined the process of community formation, development, and growth. The LDP facilitators presented the concept of "communitas," which implies a movement from chaos to order when people join together into a cohesive group. The process generally follows a somewhat organic evolution from one stage to the next, but this does not mean to suggest an easy transition by any means. As groups form, conflicts invariably arise as individual members struggle to identify roles and procedures.

My trip through Brazil provided a microcosm of this phenomenon.

When we missed our connection in Atlanta, five of us were diverted through Brazil en route to Lima, Peru. Before that time, we were basically strangers to one another, but for all intents and purposes, we became a tiny community that experienced all the stages of group development.

As I mentioned before, we met Rosi just after we missed our connection.

A few minutes later, I also met Carlos and Mirza at the Delta gate. They were attempting to resolve the same situation with a Delta agent, and perhaps faced the same level of indifference that we experienced. Carlos spoke with a heavy Spanish accent and the agent seemed to struggle to understand. Assuming that Carlos may not speak English very well, I offered myself as a translator. Carlos turned to me with a hard, red face and barked, "I have been an English teacher in New York City for the last 17 years. I don't need your help!" His wife Mirza smiled apologetically, shrugged her shoulders, and then turned back toward the agent.

I was stunned. I offered my help and had been totally rebuffed. "How rude!" I thought. As far as I was concerned, I didn't care care to ever see that man again. But fate had another agenda. When we arrived in São Paulo, the five of us were grouped together because we all needed to catch the same connecting flight to Lima.

In São Paulo, a Delta agent met us at the gate and escorted us past customs to reach the next gate in time. We in fact arrived as other passengers were still boarding, but the airline would not allow us to board. We were dumbfounded! We had boarding passes in hand and literally saw the plane through the the glass, but they would NOT allow us to board. The man behind the counter claimed that we would put the flight over-weight. "Are you kidding?" we asked in disbelief, "We have boarding passes." The agent argued in our behalf for about 15 minutes until the plane pushed away from the gate and flew away.

As shock settled in, the agent said, "Let me talk with my supervisor and we'll see how to connect you to Lima. I'll be back in 20 minutes."

After an hour, we still hadn't heard anything. Another hour passed and another. Shock turned to despair as no one had any idea what would happen next, or if perhaps the agent had forgotten us or gone home for the day. Soon, our despair turned to anger. We couldn't find anyone that knew anything about our connection. In fact, we couldn't even find a Delta office anywhere in the airport. And of course, we couldn't leave the terminal because we didn't have the proper Brazilian visa.

Our little group descended into conflict. Carlos and I had already bumped heads over my assumption that he didn't speak English. Now our group was arguing about the best way to find a connection to Lima. Carlos and Mirza argued in favor of waiting. "When the agent returns, we want her to find us here."

Rosi, always the spitfire, argued for a more pro-active approach. "The agent has forgotten us. I say we find another agent to get us a ticket to Lima." The three of them argued until Rosi finally decided to strike out on her own. Carlos and Mirza sat quietly in the terminal. Sheli and I took a compromise approach. We took turns waiting at the gate while the other tried to find someone with answers.

After a while, it became clear that no answers were forthcoming. The Delta agent was no where to be seen, and no one could tell us anything. Even Rosi returned to our little group frustrated and angry. After a few minutes, the argument turned away from the issue at hand, and delved into something completely unrelated. Rosi got angry at Carlos for his insistence on speaking English, even when he was clearly a native Spanish speaker. They also argued over the role of women in Peruvian society. Carlos said that women receive better treatment in the United States, but Rosi insisted that the only way for the social situation to improve was for Peruvians to stay in Peru and MAKE changes happen.

Finally Rosi demanded to know why Carlos refused to speak Spanish. He said, "I was born in Peru, but now I am a US citizen. I am an American and I am proud of my new country. I am thankful for everything the United States has given me, and I will show my gratitude by speaking English." As he spoke, his face softened.

I was stunned. Back in Atlanta, I judged Carlos as a hot-headed ingrate, but now I began to see him in a new light.

After waiting five hours in the São Paulo terminal, the agent finally returned with tickets in hand. Unfortunately, they were not tickets directly to Lima, but rather we had to pass through Buenos Aires, Argentina, and then continue on to the final leg of our journey. She had also arranged for us to take a shower in a micro-hotel inside the terminal. She gave each one of us a voucher and then she handed me a collective boarding pass with all five names. That boarding pass formalized our connection as a cohesive group, if only for the purpose of getting to Lima.

The group dynamic shifted after that moment. The scuffles and conflicts ended and we began to identify clear roles for one another. I took care of the boarding pass, while others organized a meeting time after our showers. When someone expressed frustration, Carlos took the role of comforter-in-chief. He became the wise, re-assuring father figure guiding us all. By the time we boarded our connecting flight to Argentina, we started looking out for one another and expressing concern. We became a community.
Posted by Barry Moses (Sulustu) at 10:02 AM