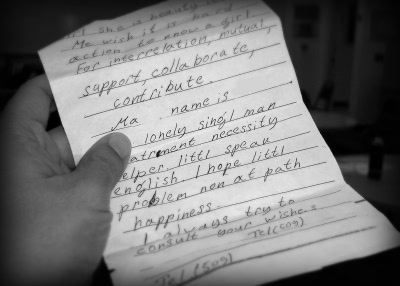 The man with the photocopied marriage proposals paid a disturbing visit to my workplace.
You may recall that my co-worker Jessica received a marriage proposal from a complete stranger while shopping several weeks ago. Early this evening, that same man was seen distributing a similar proposal 'flyer' in our parking lot - some were placed on car windshields, while others were given to female students as they entered the building. Some of the students complained of harassment and asked me to intervene. Others were simply frightened to go outside.
In response, I contacted our security guard and asked him to direct the man away from our campus. Come to find out, he had already been asked to leave several times before as a result of the same behavior.
When Jessica first received this letter, I felt somewhat sympathetic toward this man whom I perceived as socially misinformed and lonely. But as a repeated pattern of trespassing and harassment emerges, I feel something shifting within myself. Most importantly, I feel more protective of my students than ever before.
*
The photo above shows a letter that was received by one of our female students as she entered the building this evening. It's very similar to the one received by Jessica several weeks ago. As a bizarre side-note to this story, the man also gave her a package of strawberry shortcake glaze. Strange.
Once again, I removed the name and phone numbers before posting the image online.
Posted by Barry Moses (Sulustu) at 11:56 PM