The Faces of Gonzaga 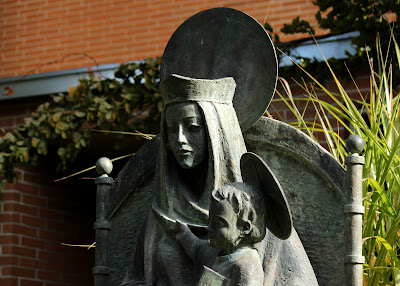 This morning I attended a class in "Personal Ethics" at Gonzaga University, and by the end, I felt so weary of attending to every nuance of our philosophical discussion that I decided to take some immediate mental health time. I couldn't even wait long enough to re-connect with nature or to find a quiet place for reflection; I simply walked out the door with no destination whatsoever. In that moment, I needed to be as mindless and timeless as possible.

Within a few moments, the cool air filled my lungs and I felt myself drawn by the faces of Gonzaga.

The first face belonged to Our Lady of Walsingham and her infant child. I'm not sure about the official story, but this image caused me to reflect on the special bond between mothers and sons. I was also drawn to the disks behind the head of each image. Presumably, the disks are meant to represent the sacred nature of the personages depicted in this piece. But I also imagined that the disks might show some remnant of pre-Christian cultures, perhaps like the sun-disk of the Egyptians or simply the reverence many primal peoples feel toward the sun. Whatever the case, this piece comforted me in some way, perhaps because I saw a common thread of warmth and light spanning across culture and space. 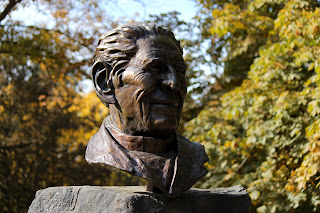 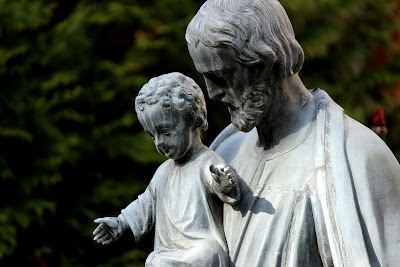 This was my other favorite statue. I believe it depicts Saint Joseph holding the Christ Child in his arms. I respond to this piece on several levels. First, according to the traditional story, Joseph was a guardian to Jesus, the Son of God. In this way, Joseph embodied a supreme devotion and trust to care so lovingly for a child not his own. This makes me think about the love we sometimes feel for people that is based on a spiritual connection rather than blood.

Second, I have always had a soft spot in my heart for artistic depictions of Jesus as a child. Something about this image speaks to the idea that an infant could overcome all things. This was a child who would grow up to say that leaders should be servants and that the meek would ultimately inherit the earth. 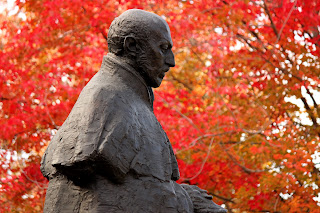 I recently photographed the statue of Saint Ignatius, but not with the brilliant red leaves in the background. 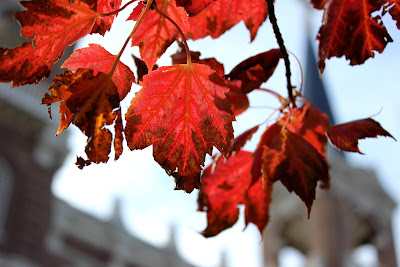 Of course, I cannot forget the beautiful faces of fall-colored leaves. 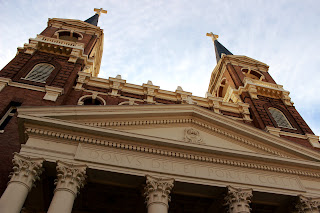 Nor can I forget the face of the church with its grand portico that reads in Latin: "House of God and Doorway of Heaven."
Posted by Barry Moses (Sulustu) at 6:09 PM