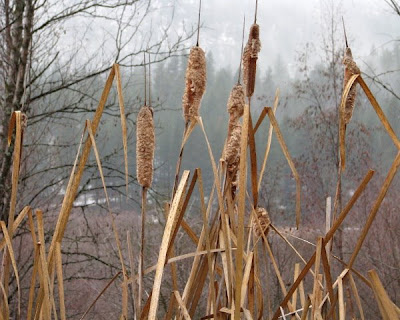 I thought for sure I already finished my cattail stories, but it turns out that little plant holds a few more surprises.

After we made those little cattail people, I found some information online regarding its use as a food. To my surprise, almost every part of the plant is edible. In fact, both the pollen and the roots can be used to make a kind of flour.

Of course, I had to try.

Dakota and I trudged down the hill to dig up cattail roots. We found them much more difficult to uproot than expected. Many of the roots broke off underground, and many more quite simply didn't budge. The few roots we managed to extract from the mud convinced me we would never survive if we had nothing to eat but these roots. Unless we found an easier way to dig up the darn things, we would burn more calories than the plant provides. 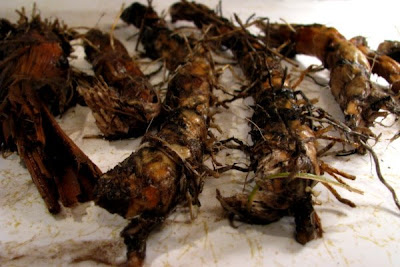 These are the roots we managed to take up from the ground. The mud had a kind of rotten swamp smell. Of course, we washed that away in the kitchen sink. 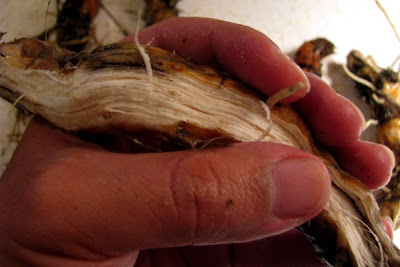 After washing the roots, we peeled the outer layer and exposed a white inner layer. Next, I crushed the roots in a bowl with water, using only my hands. I was careful to force the fibers against each other and thereby extract the inner starchy material. The nutritive substance in the root made my hands feel soapy. 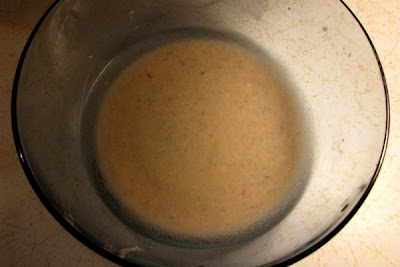 After all the fibers are removed, the edible portion forms something like a starchy sludge at the bottom of the bowl. The water is removed and the rest is allowed to dry. 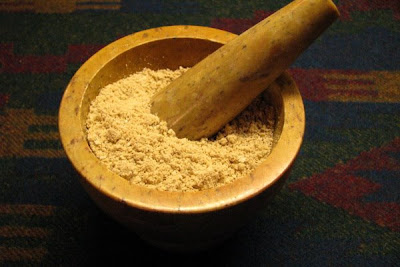 Once dry, the remaining powder actually does have the consistency and feel of flour. I was quite happy with the results, but as I said, I wonder if the amount of work balances the nutritional value. We probably worked for more than two hours, and yet harvested less than a half cup of flour. I suppose it's good to know in a pinch, but I won't be digging up the swamps any time soon for my survival needs.
Posted by Barry Moses (Sulustu) at 5:09 AM

I wonder if you did it at a differnt time of year when the ground is softer if they would have come out easier. Or, if it was close to water the ground might be softer.

I'm not sure. I imagine it would be difficult all the time, but I don't know. One site says you should reach in with your hand and pull up the horizontal roots. I didn't try that because it was so damn cold. Maybe next time.