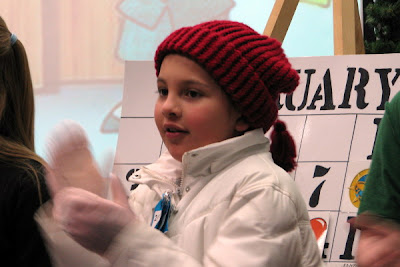 The premise of the play was cute, in a fourth grade sort of way. The Month of February stands trial on charges of not performing his fair share of the yearly workload. After all, February only works 28, or occasionally 29 days a year, when the other months work a full 30 or 31 days.

The prosecution only calls two witnesses, January and March, who each work a full 31 days. My daughter played the role of January. She appeared on the witness stand wearing a heavy winter coat and a knitted cap. She testified of having to work a full extra day because February just wouldn't pick up the load. She then broke down and cried on the witness stand. She did such a wonderful job.

In turn, the defense calls a dozen witnesses or more; people like George Washington, Abraham Lincoln, Babe Ruth, Susan B. Anthony, Thomas Edison, and the Boy Scouts of America. Each witness made obvious contributions to the greater good and incidentally, each celebrates an important birthday during the month of February. The defense argued that February has actually done more than his fair share of the work.

In the end, February is acquitted and released from police custody. Of course, the courtroom (the parent audience) burst into cheers

I managed to get a picture of my daughter dressed up for her play, but just as I went to make a video of her performance, the batteries of my camera died. I was appalled with myself. Usually I carry and extra set of batteries, but I left the house in such a hurry that I forgot.

I'll see if I can get Whitney to re-enact her part for our youtube page.
Posted by Barry Moses (Sulustu) at 10:25 AM