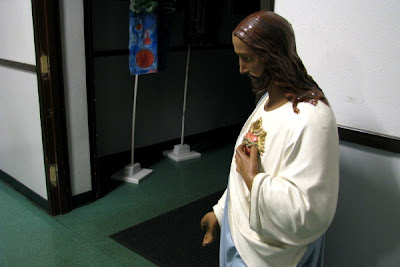 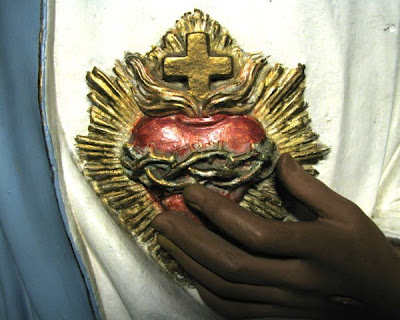 The religious images at Saint Al's reminded me of a curious episode in my life.

When I served an LDS mission to Guatemala, the religious culture of that place changed me. For a time, I leaned much more conservative, but in a strange, non-American and non-LDS sort of way. For example, the use of religious images became offensive to me, and by religious images, I mean any depiction of deity whatsoever.

Allow me offer some background information.

In contemporary Guatemalan culture, a deep religious divide separates Catholics from Evangelicals. Catholics accuse Evangelicals of subverting the traditional authority of the church and Evangelicals accuse Catholics of mixing Paganism with Christian worship. Mormons are universally distrusted by both sides of the social divide.

On one occasion, I visited the home of an Evangelical to present the first of six religious lessons. The first line of the first lesson said something like, “Most people believe in a Supreme Being…” The purpose of that opening statement is to build upon common beliefs with others who presumably believe in some kind of Higher Power. I followed my missionary training and displayed a simple painting of Jesus as I spoke about my belief in God.

The man interrupted me and said, “Why did you bring that graven image into my home?”

His question stunned me and left me speechless.

He repeated the question, “Why did you bring that graven image into my home?”

Finally I managed rather a timid response, “What do you mean?”

“You brought a graven image into my home,” he accused.

“What do you mean?” I stammered again. He then pointed to the painting of Jesus in my hand.

I still failed to understand. Certainly Mormons weren’t like Catholics, I thought to myself. We didn’t keep statues of the Virgin Mary or of the various saints. Graven images were things used in occult worship, I thought, not something used in the Mormon Church.

“Do you mean this picture of Jesus?” I finally asked.

“This isn’t a graven image,” I said, “It’s a visual aid to help people understand the Savior.”

“Do you know what Jesus looks like?” he asked.

“Then how are you helping people understand the Savior?” he pressed. “You’ve created a false image of Christ, and now you promote your falsehood to the people.”

At this point, his resistance annoyed me. Was he serious, or just difficult?

“But this isn’t a graven image.” I countered again.

“Is it an image?” he insisted.

“And is Christ in heaven?” he continued his inquest.

“Then you have made an image of something that is in heaven, contrary to the commands of God.”

“But we don’t worship the image!” I said, my voice breaking with anger, “We don’t pray to it and we don’t give it any special consideration. We simply use it as a visual aid.”

“No matter,” he said, “God commanded us to not make images at all, regardless of the purpose. There is no room for changing the holy purposes of God. You’ve broken the second commandment.”

I left feeling hurt, angry, and confused. I thought he was something of a crackpot, until I encountered others who believed the same. Other people pointed out that Jews and Muslims also avoid depicting deity in any way. “The scriptures are clear on this matter,” they would say. Time and again, I met people who accused me of promoting the use of graven images. By the end, I practically felt like a Satanist.

In time, I began to doubt myself. The way they explained the commandments made me wonder if I had been misled all these many years. At first, I stopped using the visual aids during discussions, and then I questioned my faith in the church altogether.

By the time my mission ended, I was almost convinced that any images of God were a sin.

But then I returned to the United States and my cultural immersion ended. Once I returned to my normal environment, my thinking returned somewhat to a baseline state. In fact, my thinking eventually became the opposite. I’m now fascinated by the images people use to describe their faith. I don’t worship images, but I now appreciate their beauty and their power to motivate people to good.

I’m not sure how to explain what happened to me, except to say that I lived in a powerful environment that affected my thinking. You just can’t understand that different reality until you’ve lived it.
Posted by Barry Moses (Sulustu) at 10:15 PM

I'm Protestant (Baptist) and I've never heard of a dipiction of Christ being a "graven image"...unless of course you worshipped it. Interesting.

Yeah, it's strange. But when you live in that environment, it changes your mind on things. A VERY literal reading of scripture says that we should not make any image whatsoever, regardless of purpose. And yes, orthodox Jews and Muslims adhere to this faithfully. That is why you never see pictures of God in Jewish art, or pictures of Mohammed in a mosque.

I don't necessarily follow this... but I can see where it comes from.

Personally, I don't like the images for Christ. He's always a white guy with flowing brownish hair and blue eyes.

The man was Jewish. He definately didn't look like that!

Yeah, I wonder if anyone has attempted some kind of realistic depiction. That would be good to see.

I spent the summer of 1988 in Belize doing mission work. I remember one evening while walking through a small vintage, Punta Gorda, I discovered a building with a sign, "Jehovah Witnesses." I was 20 years old and for the first time realized that it was not just Nazarenes bringing messages to the Creoles and Indians in Belize. There were many churches there trying to save them. Eventually, it would appear that tourism saved them. They were so poor...

I believe I've written about this on my blog - about a boy I met in Belize named Ellington. I can't remember though.

At any rate, this is such a thoughtful post. When were you in Guatemala? We made a side trip there that summer, and most of the souvenirs I bought to take back to the states were Guatemalan. Belize had little or nothing.

I have so much to say about my time in Belize. I rarely talk about it. A thousand thoughts about it swimming in my head - my visit was so superficial - and their reality - so severe. Of course, I didn't know it was superficial then. I thought I was saving them.

Also, as I understand Scripture, Christ was not an attractive man. He was very dark with a scarred complexion - as I understand the Greek translation explained to me by Greek NT scholars. But, I do love the pictures of Jesus I grew up wtih as a child. Heck, I love all the pics of Jesus. The Black ones; the ones with blonde hair and blue eyes. My favorite is the painting of him lifting a lamb off a cliff.

Hi Jen, I was in Guatemala from 1991 to 1993, and like you, I went to save people. I don't regret anything about my mission experience, but in the end, that place changed me more than I changed it.

I would love to hear more about your experience in Belize. The parallels between our families is amazing.