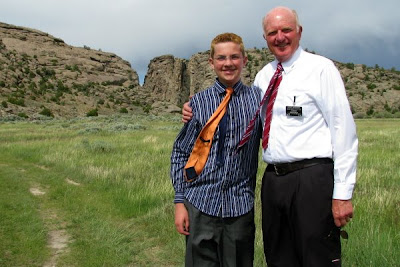 Dakota and his grandpa Ron near Devil's Gate, Wyoming. 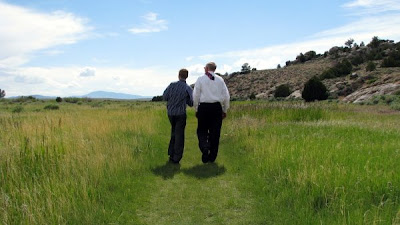 On Sunday, we attended church services at the LDS visitor center near Martin's Cove. Most of the missionaries in attendance are retired couples, like Rhonda's father and step-mother. They're a friendly bunch of people with a sort of humble, country charm, and they all seem motivated by a solid conviction of their faith. No doubt, the Mormon ancestors who perished nearby sanctified the ground with their suffering and death.

After church, still dressed in our Sunday best, Ron, Dakota, and I hiked to a place known as Devil's Gate, which is a small, but striking canyon carved into rock by the Sweetwater River. Four of the most important historic trails once passed within a stone's throw of the river: the Oregon Trail, the Mormon Trail, the California Trail, and the Pony Express. Before the westerward migration, Native Americans had also created a trail along the same route. 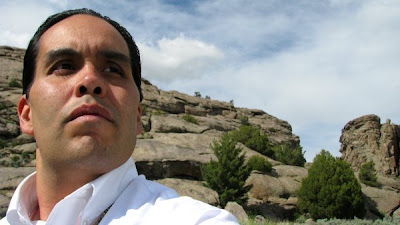 Of course, standing at such an historic and picturesque location, I had to take a self-portrait using my now-famous pose, "The Barry." This is dedicated to Paul, and now also to Tim and Robert.
Posted by Barry Moses (Sulustu) at 7:05 PM

"The Barry" ... My husband and I have one of those poses. We're always kissing somewhere while I snap the shot. LOL!

Oh wow! That sounds even better!