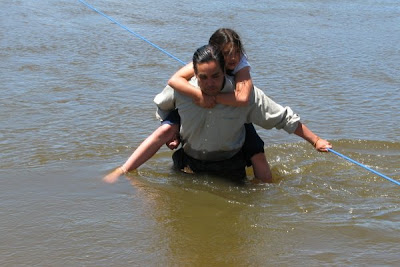 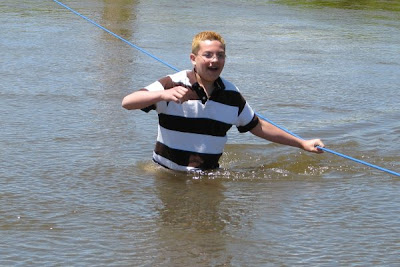 When the Martin Handcart Company reached the Sweetwater River, many were so incapaciated from hardship and cold that they could not walk. Rescuers from Salt Lake City carried the people across the river, even as chunks of ice filled the water. Four young men in particular were immortalized when they spent almost the entire day carrying the survivors across the river, in spite of great discomfort and suffering to themselves.

In memory of this tragic and heroic event, Dakota, Whitney, and I forded the Sweetwater River near the site of the original rescue.
Posted by Barry Moses (Sulustu) at 9:25 PM

Great pictures. My kids did this a couple of days earlier and said the water was deep - looks like it was. I had great-grandmothers on both my father and mother's family that were in the Martin handcart company and rescued by some very gracious men. I am very thankful. I'm glad you had the opportunity to visit the place.

Wow. I didn't know that.

It was a lot of fun to cross the river from the comfort of our modern lives. On the other hand, when we stopped to consider the harsh winter conditions of the 1856rescue, we were quite sobered. It's amazing to think what people had to experience, and in reality, it wasn't that long ago.