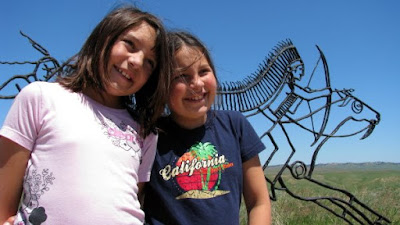 My daughters at the Native American portion of the Little Bighorn monument.

South of Billings, we entered the Crow Nation and stopped at the Little Bighorn National Monument. General George Armstrong Custer made his famous last stand nearby on a grass-covered hilltop, now marked with a large monument and scattered tombstones. A park ranger recounted the fateful story as an epic struggle between gold-hungry settlers and the last free bands of plains Indians fighting to preserve their way of life. It's tempting to view those events as though they belong to some far-removed ancient history, but within the whole span of human existence, the conquest of Native peoples happened only yesterday. Actually, some degree of conquest continues to the present day.

A quote from Sitting Bull stands at the entrance to the museum: "You are fools to make yourselves slaves to a piece of fat bacon, some hard-tack, and a little sugar and coffee." His words were prophetic. The greater part of the conquest happened when Native people became dependent on Euro-American trade goods, like the ones mentioned by Sitting Bull. Metal cooking pots did more to change our way of life than guns and war. Makes me wonder how many modern conveniences continue to erode our traditional ways. In many cases, cultural survival in the twenty-first century requires a conscious effort. 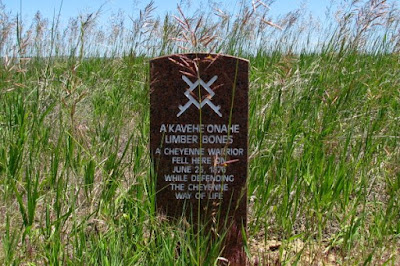 Red tombstones mark the location where Native warriors had fallen during the Battle of the Little Bighorn. The tombs remained nameless for many years, until their descendents returned to honor their memory. 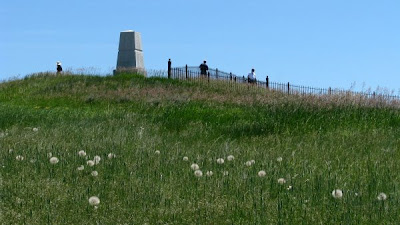 A large stone marks the place where Custer's men were placed in a single mass grave. 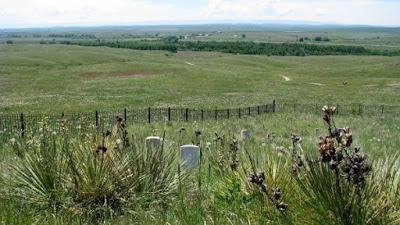 White stones mark the place where US soldiers fell.
Posted by Barry Moses (Sulustu) at 6:11 PM