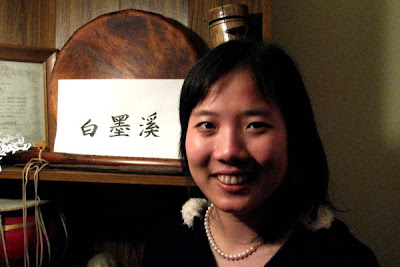 Elena (Jin Yangzi), visited our home this evening and gave me a Chinese name. She wrote the name in beautiful Chinese calligraphy, pictured above, and wrote a detailed explanation.

After receiving the name, I explained that in the Spokane culture, when a person receives a name, he or she is required to make a payment to the name giver. According to at least one traditional price, I offered her a Sacajawea dollar. I also gave her a name in our language.

Moses is translated directly as 摩西, but it looks like a very western name. I changed the character, but not the sound of it to make it look a little bit more like a Chinese name.

白 BAI is based on the pronunciation for Barry, which means white and pure.

Mo Tzu probably lived between 470 and 391 BCE. After a short period as a civil servant, he became a traveling philosopher like Confucius, counseling feudal lords on government and personal conduct. Unlike Confucius, he stressed the need for universal love, rather than love restricted to the family. He justified this in terms of the practical benefits it would bring, not least the prevention of social strife and war. However, by promoting the ideal of universal love, he essentially denied the basic tenets of Confucianism, and became a target for contempt in Confucian texts. This may have been exacerbated by the fact that Mo Tzu and his followers may have been poor; they certainly gave considerable thought to the plight of the poor in their teachings. In contrast, while the Confucians were humanists, they tended to be concerned with producing an elite class.

Mo Tzu was noteworthy in his emphasis on the need for a proper methodology in setting up or accepting a doctrine. He argued that it should be tested by examining its basis, its verifiability, and its applicability. He used these tests to refute the doctrine of fatalism, arguing that the benefits of avoiding this doctrine would be the removal of poverty, the loss of population, and the prevention of civil disorder. Along with Confucianism and Taoism, Mo Tzu's philosophy was one of the three major Chinese philosophies that had been established by the third century BCE.

XI means a “little brook.” It reminds Chinese of peace and tranquility.

Mine was given as Lau Wan Tan - which basically translates to Peter Pan. I think you got a better deal!

That's hillarious; how did you get that name?