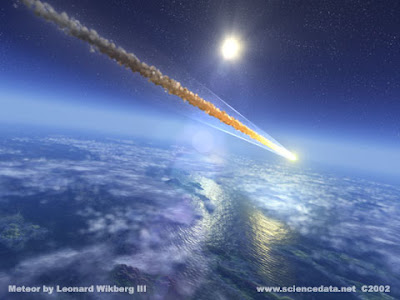 The other night, I had a most curious dream.

In my dream, my mother-in-law and I traveled back in time to the beginning of the world.

The earth was beautiful, unspoiled, and clear. Snow-capped mountains nourished an abundance of small streams that each combined into great shining rivers. Evergreen trees sheltered the hillsides while flowering meadows covered the valleys. Animals and birds breathed the clean, fragrant air.

Humans lived in small family groups, gathering the fruits of the land.

My mother-in-law and I stood on a mountaintop, looking down at the idyllic world from the beginning of time.

As we observed the innocence of creation, some kind of meteorite or flaming disc fell from the sky, leaving a long smoky trail across the heaven. At the moment of impact, the object exploded into a violent fireball and set the forest ablaze. Bright orange flames pierced the sky and formed a billowing cloud of ash. Tiny particles of dust and soot scattered into the wind and settled over every living thing.

In that moment, a woman’s voice spoke to us, like an unseen dream-narrator or an interpreter. She said, “I will tell you the origin and purpose of the object you saw falling from the sky. The disc came from Kolob. After it burned to ash, the particles contaminated everything they touched. The black dust poisoned all the land, the water, the plants, the animals, the air, and finally the human race, causing a great change to come upon your planet. Where men once lived in peace, they became liars and murderers. The ash brought the possibility of evil and gave you the freedom of choice.”

Despite the promise of freedom, we fell to the ground, huddled together, and trembled in fear.

Then I awoke, still breathless and shaking.

As I consider this dream, I cannot escape the influence of Mormon theology. Mormonism teaches that God dwells upon a glorified sphere known as Kolob, and the being we call Lucifer once dwelt in the presence of God as an angel. But Lucifer rebelled. God banished him to the earth where he became the devil.

I see within this dream an archetypal journey from virtue to darkness. But this is not the end of the story. The loss of innocence may bring about suffering, pain, and evil, but the power to choose offers redemption. In this way, the creation story holds meaning for anyone who ever suffered disappointment, failure, or abuse. No matter what glories may have perished from our memory, and no matter how we may tremble in the face of uncertainty, we always have the power to CHOOSE a better quality of life.

Why has this message arrived at this time in my life? Why did my mother-in-law appear in this dream experience? I can't say for certain, but I appreciate this reminder of the grand scheme of things. Suffering is never wasted, failure brings opportunity, darkness presents the possibility of rebirth, and eventually, all things must combine for the ultimate good.
Posted by Barry Moses (Sulustu) at 11:04 PM

Fabulous!!! Very insightful dream/vision. I will come back to this post again to ponder. This is just beautiful. Thanks for sharing with all of us.

I´m glad you found some meaning in my dream experience. Just out of curiosity, what message does this dream bring to you at this time in your life?

You have such vivid dreams. Like Oklahoma Farmgirl, I'll have to give this some thought; come back and read it again and then comment.

Do you find it kind of ironic that three bloggers in Oklahoma who all follow each others' blogs follow YOU? T.R. found me through your blog when I posted something about Oklahoma. He lives 1 mile from me but we "met" here. The world seems so small at times.

Hi Jen, I look forward to your response.

And yes, I do think it odd that we are all connected. I really think we need to do a blog meeting or dinner in Oklahoma some time. We all deserve to meet in person.