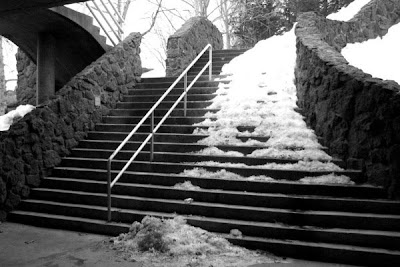 Last night I had a nightmare.

In my dream, I opened my eyes as I lay in bed. Through the darkness of my room, a black shadowy face flew toward me. The face reminded me of a cherub from the Middle Ages, like a baby face with wings but no body, except the face from my nightmare was pure evil; a dismembered head flying through the air. The dark hollow eyes fixed themselves upon me as I let out a wailing scream.

My wife shook me gently and woke me from my terror.

Later in the day, I forgot about the dream. I found myself rushing from one appointment to another in downtown Spokane, and passed under the Washington Street Bridge. As I reached the bottom of the stairs, I saw another phantom face staring back from a graffiti image strewn across the wall in thick black paint. The ghostly figure pulled my attention from mundane concerns, and brought me back to the moment of my nightmare scream. 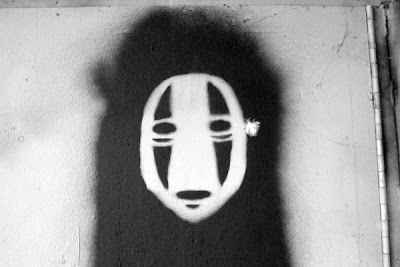 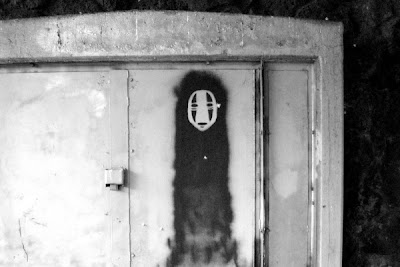 What does it mean? What message should I learn from that awful dismembered head? Why did I see him twice, once in my dreams, and once by a strange "coincidence" of my daily life? Slightly shaken, I hurried away from the concrete underpass and continued toward my next appointment.

I just learned that only a few short hours after my nightmare, my cousin was killed by a hit and run driver in downtown Spokane. The shock of his untimely death is bad enough, but then I remembered something that sent a shiver through my body. The last time I saw that nightmare face was in a dream I had several years ago when another member of my cousin's family died.

As odd as this may seem, that shadowy face creates something of an existential dilemma for me. Was it prophecy? And if so, might something have changed for the better if I had connected the dots sooner?

What a pitiful psychic I've turned out to be...
Posted by Barry Moses (Sulustu) at 11:29 PM

I am sorry to hear about this tragedy, and such an unsettling nightmare. My mother once told me that I had the gift of prophecy. "I can't predict the future," I said. "The gift of prophecy is not about predicting the future," she said. "It's about understanding the present so you know how to pray." I hope this helps you. Every time you saw the face, it seems to have been a call to intercede for someone in need.

*prayers for the departed and those grieving the loss*

Thank Jen, actually, it does help. I've spent a lot of time trying to understand this thing we call prophecy. It really does seem to have less to do with telling the future, than just getting deeply connected to the present.

I'm deeply sorry for your loss.

Thanks Krystal; your words are very helpful. Reading the signs can be a tricky thing, especially when we have so much invested in a particular outcome. I guess that's why a certain degree of detchment is helpful.