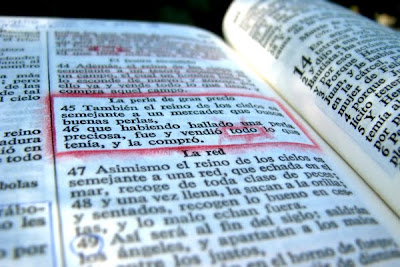 Random Fact #4: I read the Bible from cover to cover.

Actually, I've read the entire Bible twice, once in English and once in Spanish.

Back in high school, I attended early morning seminary as part of my experience in the LDS Church. In fact, I completed two years of study in one, reading the Old Testament in English, followed by the New Testament. At the end, I graduated from seminary and received a diploma from the Church Education System.

During my mission to Guatemala, I read the Bible in Spanish.

Unfortunately, my motive for reading the Bible in Spanish was less than noble. During my mission experience, I happened upon a family who was active in another religion. We were always encouraged not to debate sacred principles, but I was more impulsive back then and got myself into a heated Bible bash with one of their congregation elders. In less than five minutes, the man wasted my arguments and humiliated me in front of multiple onlookers.

The sting of defeat motivated me to study the Bible with more passion and dedication than ever before. I pored over every chapter, verse, and letter from Genesis to Revelations, underlining important verses and making handwritten notes in the margins. All the while, I made mental preparations for the next debate.

My big opportunity came near the end of my mission when I met a young woman of the same faith as the man who embarrassed me before. For the better part of an hour, we argued. At first, the young woman held her ground, but my obsessive preparations put me in a stronger position. By the end, her words began to falter as she looked for a way to end the conversation. In that moment, I drove the final argument and left her speechless. With eyes downcast, she simply walked away.

I anticipated this moment for many months, but there was no victory, no glory. Instead, a feeling of intense shame settled over me. I remembered my own embarrassment from losing the previous Bible bash, and then I returned that humiliation to someone else. When I saw the look of sadness on her face, I could not imagine that Jesus would cause such suffering for anyone.

Since that day, I have reflected many times on my arrogance. Ironically, it's so easy to argue religion and to believe that we alone possess the truth. As my brother-in-law once said, we often think it's better to be right than to be kind. I've forgotten this lesson many times, but today I remember and repent.