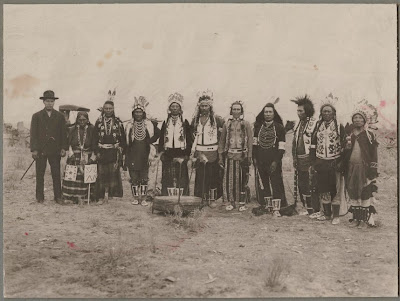 Earlier this evening, my cousin sent this photograph to my email. The picture shows a group of Spokane tribal members from the beginning of the 20th century. My great grandfather Jim Elijah is standing in the center wearing a white beaded vest and possibly a horned headdress.

The old Plateau Salish styles seen in this picture are quite beautiful.

The lone woman in the photograph is holding two old style bags. It's unclear from the picture if the bags are cornhusk or beaded.

An old style drum stands in front of the group, supported by four upright poles, each one decorated at the top with feathered plumes.

In my lifetime, I've only seen this kind of drum two or three times. When I was a child, I saw an old Spokane style drum at the Wellpinit Powwow. I don't now recall who was the owner of that drum. Much later, I saw this kind of drum at a county park, north of Spokane. It had been made by a non-Native man who had a strong interest in re-creating authentic Spokane art forms. He and I attended the same scout camp, and when he learned of my connection to the Spokane Tribe, he asked me to sing on his drum. I was honored to do so; unfortunately, back then I never thought to keep in touch. I didn't appreciate how rare it was for someone to possess such skill in the old ways, especially someone from outside the tribe.

Maybe someday I'll build my own drum. If I do, I may even try to emulate the old Spokane style.
Posted by Barry Moses (Sulustu) at 12:07 AM

There are two men with white vests. Is the one with the belt or without the belt?

He's the one wearing the belt.