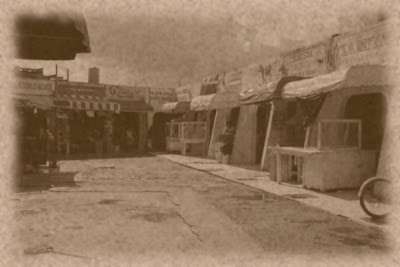 As I finished my foreign exchange experience, I stayed a couple days with a friend in Mexico City to play tourist and see the sights. Mostly, we drove around photographing major buildings and monuments, but we also did a fair amount of shopping, and with every new purchase, my pockets filled with heavy coins. By the end of the day, I received enough worthless currency to become a nuisance. "What will I do with all these coins?" I complained.

My friend took me to a street market just before going to the airport because he said I had to try one of their famous tacos. "You're going to love it," he said. His prediction proved true.

I stood on the street corner holding all my new found tourist memorabilia with one hand and balancing the taco with the other. Rich, greasy taco sauce dripped down my hand with each bite. It was a difficult position to be sure, but then a woman approached with an outstretched hand, begging for spare pocket change. Usually I try to give to those who ask, especially since I complained about the excess coinage just a few moments before, but the inconvenience of the situation caught me off guard. Feeling unable to simply drop my parcels or the taco, I opted instead to send her away.

As we drove to the airport, feelings of guilt crept into my awareness and my inner voice accused my obvious lack of generosity. As people often do when they experience guilt, I began to mentally justify my actions. "It was her own fault," I thought to myself, "Didn't she see the inconvenience she caused when she interrupted me? Didn't she see I was busy? Didn't she plan ahead or make some effort to improve her situation?" By the time I boarded the plane, I felt justified enough to forget all about the woman at the market.

After departing Mexico City, my flight stopped in Mazatlan before returning to the United States. There I encountered a situation I did not expect. Mexican immigration officials forced us to disembark the plane, present identification, and pay a $10 "exit fee." No one told me about any "exit fees." How could I have known? I approached the counter and said to the immigration agent, "Sir, I have a problem. I don't have any money. I just have these few coins, but they don't add up to the required $10 fee."

He didn't even look up from his computer screen. "Then I suggest you find some money before your flight leaves in the next 30 minutes."

His response insulted my sense of entitlement. "What happens if I don't pay the fee?" I demanded.

The agent continued typing into his computer. "If you don't pay the fee, you don't leave the country."

Finally he looked up and sighed heavily. "Look. I don't care if it's your fault or not. If you don't pay, you don't travel. You really should have planned ahead."

"And just where do you expect me to get the money?" I asked, indignant.

"I don't care where you get the money," he said. "Ask them." He waved a hand toward the crowd of travelers waiting to re-board our flight back to the United States.

By that time, the people had already begun lining up to board the plane. I started at the beginning, asking every fellow passenger to help me with the damned fee. I saw people tucking dollar bills into their wallets as they looked back in disgust. One woman put a hand on her hip and berated me for not planning ahead. "It's your own fault!" she said. Another woman said she was too busy to help. Then a group of American tourists told me abruptly to stop bothering them. One by one they all passed with the same level of indifference and self-justification that I had shown the poor woman in the market.

Finally I reached the end of the line. Everyone had already boarded the plane as a feeling of desperation overpowered me. "What will I do?" I almost cried aloud.

Just then, a man arrived late to board the plane. I practically threw myself at his feet. "Sir, please help me," I begged in Spanish. "I'm stranded here unless I can pay the exit fee!"

With a look of sincere concern in his eyes, he opened his wallet and said, "How much do you need?" I told him the amount and he handed me a $10 bill.

Thoroughly humbled, I said, "I can pay you back when we land."

"There's no need," he said as he smiled and walked away.

As I finally paid my exit fee, I remembered a passage from the Book of Mormon: "Are we not all beggars?" The words played over and over in my mind. The full context of the verse fit my situation exactly:

“...ye will administer of your substance unto him that standeth in need; and ye will not suffer that the beggar putteth up his petition to you in vain, and turn him out to perish.

“Perhaps thou shalt say: The man has brought upon himself his misery; therefore I will stay my hand, and will not give unto him of my food, nor impart unto him of my substance that he may not suffer, for his punishments are just –

“But I say unto you, O man, whosoever doeth this, the same hath great cause to repent; and except he repenteth of that which he hath done he perisheth forever, and hath no interest in the kingdom of God.

As I look back on this experience, I think some form of karmic justice caused me to switch places with the woman in the market and to become the beggar. But in truth, I really am a beggar still. Every day I ask God to send me health, protection, and abundance. I ask him to put food on my table and to help me pay my bills. The only difference is that now I KNOW I'm a beggar and no different than anyone else.