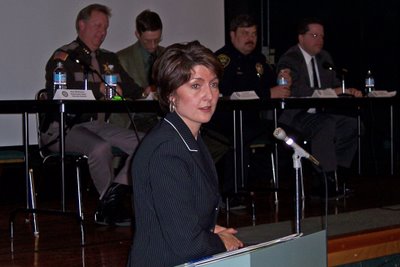 Congresswoman Cathy McMorris visited the community college at Colville this afternoon to lead a panel discussion on the damaging effects of meth on our community. I didn't watch the bullentins, so I didn't even know she was in my building until I walked by the auditorium and saw her standing at the door. I had to stop and listen for a few moments, though I was deeply distressed by what I heard. Meth is such a dangerous drug and causes severe damage to the brain. I pray for those I know and love who use this drug. I ask God to touch their hearts and inspire them to stop.
Posted by Barry Moses (Sulustu) at 11:08 PM

While I agree Meth is an important issue, but is speaking at a college really going to help the situation? Is that going to help a fight against it?
I would have to say No!! Politicians are full of hot air, and speaking about such things is null and void in my oppinion. If you want to fight meth you have to get out there and deal with it as the police do.
My oppinion about politicians, is blogged about at the msn space, and I will recap here a bit. To sum it up politicians,government, is a mask, a screen to hide behind, just a made up job with a 401k, to threaten people with. The government makes all these promises to better peoples lives, nobodies but their own. You being a college instructor I am pretty sure you have heard of the case we the people vs. the united states government. People are with holding taxes until the government answers their grievments. In other words until they comply to the first ammendment.
Another thing I believe is that government has no place in education, and dictate that children cannot go to the next grade if they do not pass the WASL, and demand that kindergarteners have perfect formation of their letters, Why punish the children for the teachers not doing their jobs?

Thank you Beautiful Ivy for your comments. I really do appreciate you checking in from time to time. Also, your point about government is well taken. I think you and I would agree government often exists to perpetuate itself, and unfortunately, government is ill equipped to address our most pressing social concerns.

One thing always bothered me about the traditional approach to meth in particular and drug issues in general. Yes, there is a definite law enforcement issue, but more often than not, people tend to discount or minimize the role of other factors leading to drug abuse; such as untreated mental health issues, lack of economic opportunity, lack of education, unskilled parenting, etc. As a nation we seem determined to lock everydoby up, without ever looking for REAL answers to peoples' problems.

Ivy, although I am not a big fan of polticans I do think anything anyone does to educate people about the problems with Meth is time well spent. I just recently learned it takes only 12-15 letters to a legislator to make them think there is a promblem in the community. It is true that polticans seem to just want to get a pay check yet the only way they can get their pay check is by staying in office. So how do they stay in office? They do what makes their constituants happy. But those who complain most and are affected most about government decisoions do nothing to change it but sit around and complain. If we want change we must as a community band together and insist upon change. I do not know ivy if you take an active role in the community so I am not judging you. I am judging society as a whole who expect change yet put no effort in trying to make change. And Barry you say that all we do is lock people up for the crimes they commit and do not ever try to remedy the problem, this is so true. Our prison popultion is growing steadily and crime seems to presist. We seem to think the prison system is working, yet it obviously isnt. I think we need to get to the root of crime(e.g. poverty). If not that we should at least concentrate on methods that reduce the risk of crimanals reoffending.

Thanks you guys for responding.
One I am very aware that you Barry used to work for the government, and so you know what goes on behind the scenes, thats how you could understand and be paitent with Joe's and my situation, with the public assistance.
Chelle, I am poor, I'm not a registered voter, so as far as I know, doing anymore than what I am doing would be a felony, like signing a petition etc. I head the neighborhood block watch here in my neighborhood( its a going right on lets party, I finally got everyone elses interest sparked wooo hooo!!!!)I also sit and blog about it with hopes to encourage others. So no worries I took no offense. I do what I can to do something, I often look at myself as a voice crying out in the wilderness, and hope that people will hear. As far as I going in and re -registering to be a voter, isn't going to happen, because I am a firm believer that mans democracy is null and void, it doesn't exhist, well it does but it won't make any difference when Jesus returns. Let me refer to what Jesus said, "give to cearser what is his, but give to god what is his". This is the way I live, so technicaly I am a voice crying out. It also says in the bible gather my people to me. Yeah some people do sit back and complain and do nothing about it, but I think that even when they do complain they have no idea what and why they are complaining. I mean is it really important to complain about the government, expecting changes when even their suggested changes will be null and void. I say do away with government and live by the laws set forward for us in the bible, you see mans law is, well those 5 freedoms, well the 13 amendmants, are gods law, then we have these twisted politicins coming in and writing loopholes, and confusing that law. Much like the advesary is said to do. America was founded for religous freedoms, government has taken religion, religous freedoms out of the mix. I read somewhere about the united States government being the second Nazi German Reich, but instead of killing many jews, they are condeming us all to death, maybe that is not the words I am looking for but we could say leaving us no choice but choosing a path that may lead us to death, such as doing drugs, commiting crimes, going to prison. Word association, you say all those words to me that I just mentioned, I say death.
What happened to brotherhood and fellowship of spirit? Loving thy neighbors as you would love yourself, you cannot even find that in churches now days because of everybodies holier than thou attitude. Methenphetomines, PCP, Herroine, Crank, Crack, whatever whatever, word assosiation again, Death. I blogged lastnight, and within that blog I wrote; god's punishment for any lawlissness is death, not physically mind you, but given the alternative to choose a path that leads to death. In close I leave this remark everything happens for a reason.
Could it be history is repeating itself?