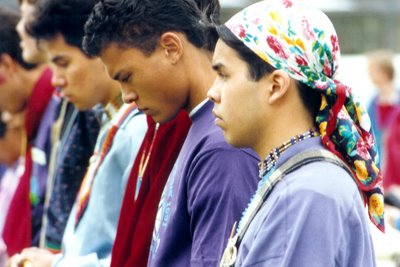 On April 22, 1990 I celebrated Earth Day in Washington DC with more than 40 other Native American youth from tribes across the nation. We performed an ancient Lakota ceremony adapted for modern times and thereby affirmed our commitment to care for the environment. A photograph of the ritual appeared on the front page of the Washington Post. Also during our visit to the nation’s capitol, we attended various government functions and met a handful of important people. For example, we observed a hearing at the United States Senate regarding water rights on Indian reservations across the country; we attended a banquet with the Secretary of the Interior and the Director of the Bureau of Indian Affairs; and toured the White House and met First Lady Barbara Bush. We attempted to meet Senator Slade Gorton to discuss environmental issues in our state, but not surprisingly, he refused to meet with us.

Sixteen years later, I observed Earth Day again, but this time with much less fanfare and spectacle. My children and I attended a small celebration in Spokane’s Riverfront Park where we perused a variety of booths representing a strange mix of environmental organizations and social causes. Some of them I recognized, like the Spokane Interfaith Council and Washington’s Green Party. Others were less known to me, such as a group representing Pagans in the Spokane area.

After all these years, I still appreciate the purpose and intent of Earth Day, but my approach to environmentalism changed. I feel no inclination to rally and protest; I would much rather teach my children to observe the spirits of nature and enter into relationship with the mountains, rivers, forests, and animals. Viewing the forces of nature as a beloved grandparent does more to inspire care for the environment than viewing the earth as simply a resource to be used and subdued.
Posted by Barry Moses (Sulustu) at 7:15 PM